The ‘Terribles’: Surviving the Twos and the Teens 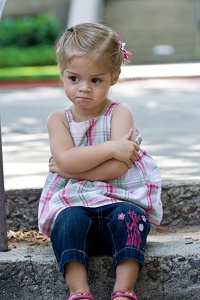 I was talking recently with a friend about surviving the “terrible twos” and she made a joking comment about how she couldn’t wait to do it again in the teen years. That got me thinking about the parallels between those two phases of life and how we react to them in similar ways.

In part, the “terribles” are a social construct. We are primed to expect as parents that those will be the most difficult stages of our parenting. Popular culture proliferates this idea through television shows and movies. Parents share “war stories” of toddlers and teens acting out. That said, there is some truth to the hype. In both phases, kids seem to challenge authority, push limits, and demand control and privacy. Frustration tolerance (for both kids and parents) is low. Relationships can get strained. Parents may feel pushed away. I’ve heard parents refer to both stages of life as a time when some alien creature seemed to come in and take the place of a previously loving, cooperative child.

What we don’t really hear a lot about is the important function that those phases serve in our children’s development.

For both the twos and the teens, the testing of limits, challenging authority, and trying to establish control all serve important developmental functions. Psychologist Erik Erikson, in his eight-stage model of development, identified specific tasks we navigate as we grow and develop. He suggested that successfully mastering the skills in each stage leads to healthy growth and development, whereas not doing so leads to issues that could impede healthy development.

According to Erikson, toddlers around age 2 are tasked with developing independence and a sense of control over their bodies. Potty training is an important piece of this puzzle, as is learning to control elements in their environment. If the 2- to 3-year-old is able to develop a sense of his or her ability to regulate his or her body, to do things for himself/herself, and to feel confident in his or her ability to do both of those, he/she develops a healthy sense of autonomy. If the child is not able to, shame and doubt in himself/herself and his or her abilities may result. So, when that previously loving, snugly, even-tempered little one starts refusing to comply with basic requests, when there is a major meltdown of nuclear proportions due to Mom or Dad putting the sock on the wrong foot first, these are actually signs that your child is exactly where he or she needs to be.

For teens, the task is to develop a strong sense of individual identity. Teens are trying to figure out who they are and what their place in the world, independent of others, should be. Establishing an identity for most teens means defining what they are not. Usually, that includes establishing beyond a shadow of a doubt that they are not their parents.

Sometimes the only way for them to declare that they are their own selves is to pull away from their parents. They may challenge expectations and rules. It’s not unusual to see a teen reject an activity or a goal because he or she fears that it was what the parents wanted for him or her, not what he or she wanted. The drive to figure out who he or she is, what he or she wants, what he or she believes, and what matters to him or her are all important elements of this stage. Usually, this means challenging conventions, testing out different identities until he or she finds one that fits, and pushing against authority as he or she seeks independence. It can lead to withdrawal, mood swings, and parents not being sure which child is going to show up at the table for dinner.

These stages are important. These stages are hard—for both parents and kids. The distancing that can be necessary for independence and autonomy to develop can be really painful. We, and they, feel the loss keenly. The undercurrents of our conflicts usually contain the messages “I want my child back” for parents or “I’m feeling alone and scared” for kids. The behaviors might manifest differently (a toddler tantrum is very different than a teen tantrum), but our role as parents is the same.

Just when our kids are pushing us away the hardest is when it is most important for us to reassure them that we aren’t going anywhere. We need to give them space to explore, but not withdraw from them. They can push and yell and pout and cry and withdraw—but if we can be constants for them, if our parental love can be consistent, stable, and unconditional, we help them have the confidence to navigate these important tasks, and we help ensure that they will find their way back to us eventually.

How do we do this? One way is by allowing them more choices (though choices we can live with) and helping our kids accept the consequences of those choices. This can be as basic as letting the toddler choose which pants to wear (as opposed to whether to wear pants at all), or the teen to choose when to do homework (as opposed to not doing it at all). We give them increasing autonomy over choices in their world that are age appropriate, that are not likely to have dire consequences, and that give them a sense of having some control over their own lives.

The second task for us is to avoid judging their choices. Sometimes they have to learn the hard way. The teen who chooses to do homework late at night, falls asleep, and doesn’t finish does not need to be scolded for choosing poorly. Instead, we can ask how that worked for him or her, if there’s anything he or she wants to change, and how we can help. That keeps an open dialogue, conveys that we respect his or her ability to make good choices, and can reduce defensiveness.

It isn’t easy. Often, we’re feeling hurt and scared and helpless too. It helps to remember, though, that it isn’t about us. We aren’t terrible, mean parents because we made him or her wear shoes on the correct feet or held him or her to a curfew. The challenge is to hold boundaries with a firm but loving hand and not react to the testing of those boundaries with fear, anger, frustration, or sadness. If we respond to our children with consistency, patience, warmth, and compassion as they work through these stages, we might find that the twos and the teens aren’t so terrible after all.