Erik Erikson was a 20th century psychologist who developed the theory of psychosocial development and the concept of an identity crisis.

Erik Erikson was born in Frankfurt, Germany, in 1902. Erikson never knew his own father; he was raised by his mother and stepfather, who married in 1905. He struggled with his identity throughout his youth as he felt his stepfather never fully accepted him as he did his own daughters. Erikson grew up using his stepfather’s surname; he eventually adopted the name Erikson in 1939.

After meeting Anna Freud while working in Vienna, Erikson decided to pursue the field of psychoanalysis. He studied child development at the Vienna Psychoanalytic Institute through the Montessori method, which focused on psychosexual and developmental stages. Erikson received a diploma from the institute, but he never received a formal degree. Instead, his knowledge was based upon his experiences and extensive reading.

Erikson married Joan Serson, a dancer and artist, in 1930, who helped him to develop his psychosocial development theory. Erikson, his wife, and young son fled the Nazi uprising for the Unites States in 1933. The couple raised three children.

The Erikson’s first settled in Boston, where he became the first male to practice child psychoanalysis in the Boston area and also served at the Harvard Medical School, Judge Baker Guidance Center, and Harvard’s Psychological Clinic, where he came into contact with psychologist Kurt Lewin and anthropologists Margaret Mead and Gregory Bateson. Between 1936 and 1939, Erikson worked at Yale’s Institute of Human Relations and as a professor at the Yale School of Medicine. While there, he conducted a year-long study of Sioux children at a South Dakota Indian reservation.

When the Eriksons relocated to California in 1939, he worked with the Institute of Child Welfare in California and served on the faculty of the University of California at Berkeley and San Francisco. He continued studying Native American children, and he worked closely with the Yurok tribe. Erikson remained on faculty at the University of California until 1951, when he was required to sign a loyalty oath claiming he was not a Communist. Erikson refused to sign the oath based on First Amendment grounds, even though he was not a Communist, and he was subsequently forced to resign from the university. Erikson returned to Massachusetts, where he continued to focus his attention on emotionally challenged youth at the Austin Riggs Center. Erikson finished his professional career with a final stint as a professor of human development at Harvard, while he continued to conduct behavioral research and publish essays. Erikson passed away in Massachusetts in 1994.

Erikson impacted psychological theories by expanding upon Sigmund Freud’s original five stages of development. Pioneering the study of the life cycle, Erikson believed that each person progressed through eight stages of development. Erikson emphasized that the environment played a major role in self-awareness, adjustment, human development, and identity.

Each of Erikson's stages of psychosocial development focus on a central conflict. In Erikson's theory of development, children don't automatically complete each stage on a predetermined schedule. Instead, people face generalized challenges throughout life, and the ways in which they answer these challenges determine whether they develop further or stagnate at a particular stage of development. Erikson’s eight stages and associated challenges include:

Erikson's wife added a ninth stage based on the couple's experiences in very late old age. She argued that as the body breaks down, autonomy may no longer be possible. The challenge during this stage is to begin to see oneself as connected to others and to see death as a natural part of the process of life.

Erikson further developed the field of ego psychology by emphasizing that the ego is not merely an avenue for the id to fulfill its desires as Freud claimed, but an important psychological structure in its own right. Erikson expanded on Freudian psychoanalysis in the widely acclaimed book, Childhood and Society, published in 1950.

Erikson's book Gandhi’s Truth: On the Origins of Militant Nonviolence won Erikson a Pulitzer Prize and a National Book Award. He also wrote Young Man Luther: A Study in Psychoanalysis and History, based on Martin Luther. He was selected to give the Jefferson Lectures in the Humanities in 1973. 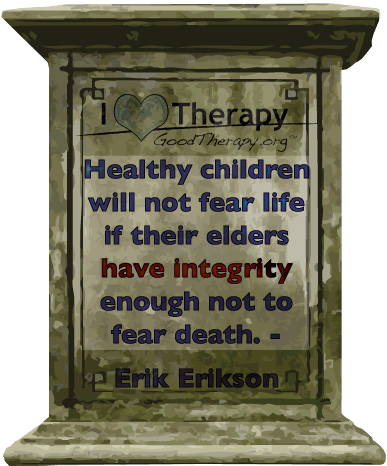