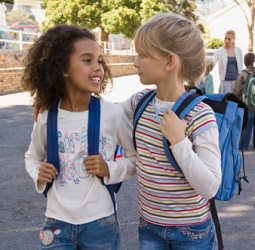 Parents sometimes find themselves worrying whether they’re interfering too much or too little in their children’s friendships. But a parent’s relationship with his or her child is a child’s first friendship, and may form the foundation for future relationships. New research suggests that a strong parent-child relationship can actually boost friendships in young children, and that kids who have secure attachments with their parents are more likely to be positive and friendly toward new friends.

The Importance of Attachment

The study examined how children’s attachment styles affect future friendships. Attachment theory is an important concept in psychology that was originally developed by John Bowlby and Mary Ainsworth. The basic premise is that children who have strong attachments to their parents have a “secure base” from which to explore the world, and that this secure base reduces the risk of mental health problems, difficult relationships, and a host of other challenges.

Most researchers believe that a child develops his or her attachment style in the first year of life. Children whose parents sensitively and quickly respond to their children’s needs are more likely to produce securely attached children. Researchers can evaluate a child’s attachment style by watching how he or she reacts when the parent leaves the room and then returns.

Researchers evaluated the parent-child attachment of 114 children at 33 months old. When the children reached 39 months, researchers paired the children with another child, then observed the interactions in a lab setting for one month.

Kids who had secure attachments to their parents seemed to like their peers more on the first meeting, even if the child being evaluated was prone to socially problematic behaviors such as anger. Researchers noted that securely attached children seemed more open to requests made by their peers, and that this effect was only undermined when the child’s peer displayed high levels of anger.

Attachment continues to be an important element of children’s health and well-being, and some parents have even adopted a parenting style called attachment parenting that advocates close contact with babies, extended breastfeeding, and co-sleeping. You don’t have to commit to attachment parenting to help your child form strong attachments, though.

Try some of the following tips to help your baby develop a secure attachment: