Mary Ainsworth was a Canadian developmental psychologist who conducted research in the field of attachment theory and developed the Strange Situation Test.

Ainsworth was born in Glendale, Ohio and raised in Canada as the oldest of four girls. Both her father and mother were Dickinson College graduates and placed significant emphasis on proper education. Ainsworth graduated from high school eager to pursue a degree in psychology and enrolled in the University of Toronto in 1929. There she earned her bachelor’s, master's, and her PhD, and she began teaching at the university in 1938. In 1942, Ainsworth enlisted in the Canadian Women’s Army Corp where she rose to the rank of major within the Corps.

In 1946, Ainsworth returned to teaching in Toronto. Shortly after her marriage in 1950, she moved to London with her husband Leonard Ainsworth, so that he could pursue his degree from University College London.

During her time in England, Ainsworth was invited to participate in research at Tavistock Clinic, where she worked with John Bowlby. The research focused on examining what effects interference in the mother and child bond may have on the development of the child. The findings revealed that when a bond between mother and child is broken, the child is at risk for developmental challenges. Ainsworth later traveled to Kampala, Uganda where she worked at the East African Institute for Social Research, continuing her exploration into the significance of the mother-child bond.

Ainsworth, in collaboration with colleague Sylvia Bell, developed a technique called the Strange Situation Test. This test is used to examine the pattern of attachment between a child and the mother or caregiver. This method of measuring the child’s specific attachment characteristics is highly respected and well established, and variations of the procedure are used throughout the clinical world of psychiatry and psychology today.

The Strange Situation Test is characterized by an observation phase and an assessment phase. During the observation phase, the clinician places both the mother (or caregiver) and child in a secure environment and allows them to interact to the point of familiarity with their surroundings. A stranger is introduced into the environment and interacts with the child, and then the parent leaves the room. When the parent returns, the child and parent are reunited and the stranger exits. After this point, the parent exits, leaving the child alone. During that time, the stranger enters again, interacts with the child, and the parent returns. The stranger leaves again and the parent and child are left alone to interact.

The child’s behavior is examined and assessed throughout this exercise. There are four key elements of behavior that are examined with respect to the child:

The results of this experiment have been categorized into four specific types of attachment:

Ainsworth's Strange Situation test demonstrated that, for young children, the primary caregiver serves as a secure base from which to explore the world. Children with secure attachments are upset when their caregivers leave, but comforted by their presence in stressful situations. Children with insecure attachments, however, are much less comforted by their parents and do not have the “secure base” that securely attached children have. The results of Ainsworth's research challenged traditional notions regarding the mother-child bond and demonstrated that infants who are fed on demand and comforted when crying, rather than adhering to a particular routine, tend to develop secure attachments to their mothers.

Ainsworth was a member of the:

Ainsworth's Strange Situation test was designed to be used with mothers and their children, so her research reveals much less about attachments between fathers and children. Some researchers have also emphasized that Ainsworth's research may not apply across cultures. A brief separation from a caregiver might mean something very different in a small tribal culture or in a family where a child is regularly left with various caregivers or frequently around new people. There is also some concern about whether one brief separation can be used to measure continuity of attachment. A child or mother might be having a bad day, for example, and this could alter their usual pattern of relating. 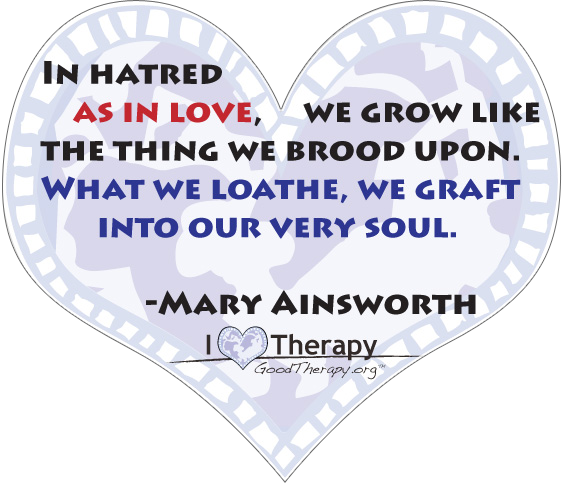