Silence Can Be Golden: Talk Therapy Without the Talking 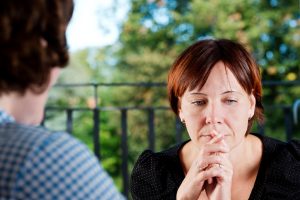 I love to talk. I can sit and watch one of those movies where nothing seems to happen except a bunch of people sitting around a room chatting. I can still be riveted because I love hearing ideas. I like words.

But talk therapy doesn’t always mean a lot of talking. Sometimes it gets quiet in therapy, and that’s okay.

In fact, it can be good.

If you think I’m “talking” out of both sides of my mouth here, it’s probably because I’ve written on this site about how talking about anything, even if it’s not something you think is related to your issue, can bring you to new realizations. It can open a door to your psyche. It can make connections about why you do things that you might not have figured out without the winding, goal-less, meandering free chat.

Yet, in some cases those words could obscure what’s really going on. They may get in the way of some important feelings. In fact, talking can be the very defense we use to avoid having certain feelings.

“How are you feeling?”

It’s a pretty clichéd therapy line. So much so that when I was a young therapist I told myself I’d never say it. I didn’t want to be compared to the long line of bad TV and movie therapists; I’d have something much more insightful to offer.

I soon realized that it’s a cliché because people often don’t know what they’re feeling.

Sometimes the question is actually fairly stressful, and for good reason. Some people spend so much time thinking and talking that they never really connect with what they are feeling. If they are asked, “How are you feeling?” the most honest answer they may be able to give is, “I don’t know.”

And that’s fine. “I don’t know” is always a fine answer. At least as a starting point. It can be a relief to say it. Correct: you don’t know. That’s why you’re here.

And then … silence. And then you sit with that unnamed feeling.

Finding the Feeling in the Silence

If you’re a storyteller, then these are important, rich, and scary moments. It can be exasperating because you often really, really want to know. And I’d love to tell you—but I don’t know how you feel, either. My tool is I’m very aware of how I’m feeling when I’m with you. And that can be helpful to share.

Therapy is not a “conversation.” It’s not a normal situation. It’s a petri dish, an experiment, a place to look at the way we interact on a meta level.

But in general, we need the silence so you can check in with yourself and see where that feeling is. Maybe it’s in your body—many physical sensations are signs of a feeling we’re having before we’re aware of it.

Heck, the “anger management” field is practically built on the idea that if we can sense that first sensation indicating we are angry (tight stomach, hot face, clenching fists), we may be able to prevent ourselves from being taken over by an uncontrolled feeling expression.

For my part, often if I have a headache, it’s a signal I’ve been feeling sad and I need to allow that feeling in. Sometimes the headache needs to pound to let me know I need to stop thinking, stop analyzing, stop talking—and just feel.

Why Silence in Therapy Is Different

Therapy is not a “conversation.” It’s not a normal situation. It’s a petri dish, an experiment, a place to look at the way we interact on a meta level. It’s often pushing against what generally makes sense as to how we go about our lives. This is why it takes time to build trust with your therapist. It’s so when you sit in silence, you can trust that you and your therapist are both still working. You’re both allowing a process to unfold and occur and not know where it’s going.

The silence gives you time to connect with your therapist—and then tell them—what you’re feeling. Something like:

How refreshing would it be to say that to someone whose job it is to process it with you? It’s a chance to better understand how you come across in an environment with someone who won’t leave you.

Trust this part of the process.

Trust the silence. It can say so much.