Is Retaliation an Option in Marriage? 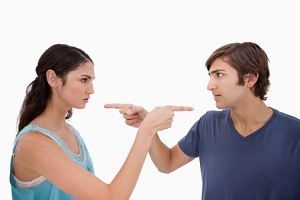 “I’ve been suffering for years,” Marcelle said. “When I tell Andrew that he’s hurt my feelings, he gets angry. Can you imagine that? What kind of human being gets angry when he sees his wife crying?”

This is a good question, and one that I get asked often. The answer is that a person like Andrew, who gets angry at being told that he has—once again—done it wrong, is a human who has never heard a word of praise and experienced more criticism in his life than he knows what to do with.

Such a person—often, but not always, a man—is highly conflicted. In moments when he does not feel put on the defensive, he cares deeply for his wife, loves her, and doesn’t want her to hurt. On the other hand, when he thinks he’s being attacked, he reflexively circles the wagons to protect himself.

“So finally, I got good and angry myself,” Marcelle went on. “How much of this can I take? I get mistreated and I can’t even express myself. That’s not right! That’s not fair! I deserve better, so I told him a thing or two. I let him have it. And, frankly, I felt much better after that.”

The Elusive Satisfaction of Retaliation
Marcelle has every justification in the world to feel hurt. It is also human for her to be angry at the cause of that hurt when he is so unsympathetic. But her reaction in this scenario is wrong. For one thing, she’s hurting herself more by lowering herself to his level. If she acknowledges that his anger is hurtful, then her anger is hurtful too. If she acknowledges that anger displays a lack of humanity on his part, then it displays a lack of humanity on hers as well.

Later, alone with her feelings, Marcelle will confide that the good feeling of “giving it back” was short lived. Over time, the idea that she had betrayed herself by stooping to his level gnawed at her innermost being. She had always liked herself for her own kindness and goodness. “Now who am I?” she wondered. Not only did she reduce herself to a level that she did not respect, but in doing so, she also became alienated from herself.

Many victims of mistreatment feel this way. They feel estranged from the person they thought they were, they don’t like the person they’ve become, and they’re still depressed over the way they were treated. They add depression to depression. Being mean and striking back is completely self-defeating.

How Retaliation Makes Bad Behavior Worse
There’s another, even worse problem with Marcelle’s reaction: it ensures that Andrew’s behavior will also get worse. Now that’s bad.

Andrew doesn’t want to be the bad guy that he is, but he has no clue how to make the awful feelings go away when he is repeatedly reminded of his failings. When he hears what comes across to him as a criticism, he is thrown into a pit of despair. After all, if he knew how to handle the problem in the first place, he would not have created it. Growing up in a home in which such things as compassion, sharing, consideration, and respect were not taught or modeled, he is unaware of how to deal with situations which call for these traits. How can he fix a problem he’s clueless about?

But Andrew does know the one thing he learned very well growing up: how to defend himself, strike back, or tune out. It’s only natural that when he feels attacked, he’s going to do what it takes to prevent those old feelings from rushing in. What better smokescreen than for him to attack back?

Will he feel better? No, just as Marcelle didn’t feel better when she retaliated. Will the marriage improve this way? Obviously not. What should be done?

Alternatives to Retaliation
Marcelle has to switch her approach from telling Andrew what he did wrong to what she wants him to do. It means changing a negative sentence to a positive one. This might not seem hard to do, but listen to what Marcelle has to say about it: “What about my feelings? Are you telling me to stifle my feelings? He’s my husband; shouldn’t I be able to tell my own husband that he hurt my feelings?”

Marcelle has a point. She should not have to stifle her feelings; she should be able to express them to her own husband. But we are not operating in a fair and just world. Her husband simply cannot hear this until he has healed from his past pain.

So Marcelle’s real job is to deal with her “shoulds.” Theoretically, she should be free to express herself, and in reality, she shoots herself in the foot when she does. What are Marcelle’s options?

Retaliation is not one of Marcelle’s options, but she will find that if she follows the options above, she will be empowered and happier, even before Andrew has started to “get it.” Eventually, he will “get it” and then they will both be happier.