PTSD and Anger: Untangling the Connection 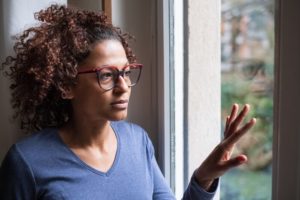 In the years following the wars in Iraq and Afghanistan, media reports of veteran violence began accumulating. Formerly social and kind people returned from war angry, and often violent. Rates of domestic violence among former combatants surged. Some veterans killed their partners or families. Many people were shocked, but the truth is that research has long linked PTSD to feelings of anger, and even violent aggression. People with PTSD may be angry about the trauma they survived or feel helpless or out of control.

In the popular imagination, posttraumatic stress (PTSD) is an anxiety disorder. Many envision people who cannot leave their homes, who are easily triggered into fear or panic attacks. Anger, though, is a common symptom of PTSD—so common, in fact, that the Diagnostic and Statistical Manual of Mental Disorders (DSM-5) specifically lists anger as a common emotional reaction among people with PTSD. Feelings of anger can make it difficult to get support from loved ones. A person who feels angry or out of control may feel guilty or ashamed, intensifying the isolation of experiencing trauma.

Even when loved ones want to be supportive, they may not fully understand the severity of the trauma, leaving trauma survivors feeling as if their suffering has been ignored or forgotten.

The Link Between Anger and PTSD

Trauma can be deeply isolating. Loved ones may not understand the trauma or may react inappropriately. For example, rape survivors frequently report being interrogated about their own behavior, while returning soldiers say that civilians are often eager to ask about violent combat experiences. Even when loved ones want to be supportive, they may not fully understand the severity of the trauma, leaving trauma survivors feeling as if their suffering has been ignored or forgotten. This can trigger anger, distrust of others, and related emotions.

Trauma itself may also cause feelings of anger. For example, a birthing person abused by a doctor may be angry both about the abuse and about losing a more positive birth experience. A child abuse survivor may have overwhelming feelings of anger directed at their abuser.

Sometimes a person’s feelings of anger are complicated. A returning solider might be angry about politicians who do not understand war, while also feeling proud about their service. An adult child abuse survivor may love their parents but be very angry about the abuse they suffered. These mixed emotions can make it difficult to manage feelings of anger and rage. In some cases, a person might feel like their anger is unacceptable or be unable to articulate why they feel angry or at whom.

Spending time with an angry person can be difficult. The friends and family of people struggling with PTSD-related anger may eventually grow tired of dealing with mood swings or angry outbursts. They may experience compassion fatigue or even end their relationship with their loved one. This can intensify feelings of alienation and anger.

People with anger from PTSD may feel both ashamed of their emotions and entitled to them. This challenging cocktail makes it difficult to talk about how they feel or to try new coping strategies. For example, when a person feels righteously indignant about being abused, they may not want to try meditation or other coping skills. After all, the thinking goes, they shouldn’t have to have experienced trauma, and shouldn’t be the one stuck coping with the after-effects. While these feelings make perfect sense, they can also be quite self-defeating.

Research has also uncovered a correlation between PTSD, anger, and other mental health conditions. A 2014 analysis, for example, found that 30.3% of people with intermittent explosive disorder (IED) also have PTSD, compared to 14.3% in the general population. When a person presents with a secondary condition, such as depression or IED, their PTSD may go unnoticed and untreated. This prolongs their suffering and may cause them to drop out of treatment, especially when they do not see results.

Other Symptoms That May Co-Occur with Anger

People who experience PTSD-related anger are more likely to experience certain other symptoms, such as:

Getting Help for PTSD-Related Anger

PTSD can disrupt a person’s life and relationships. It can make them feel hopeless and even suicidal. But no one has to live with the aftereffects of trauma forever. PTSD is highly treatable. Some strategies that can help include:

A person may have to experiment with treatment options or therapists before they find what works for them. This persistence can be challenging for someone who is already in pain. Friends and family should offer support, research treatment best practices, and remind their loved one that there is hope.

As with all mental health diagnoses, it is important to note that PTSD, even PTSD that causes intense anger, does not make violence inevitable. People with mental health conditions are far more likely to be victims of violence than perpetrators. Stigmatizing mental health issues can deter treatment, especially when people are dismissed as violent or needlessly angry.

Find a compassionate therapist who understands the many complex emotions a person with PTSD faces here.