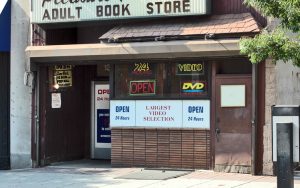 Pornography, visual material that depicts naked people and/or sexual acts, can be defined in different ways, but it is generally agreed that pornography is designed to cause sexual excitement. Although it is widely available, it remains controversial: many people consider it inappropriate and obscene, and some believe it to be addictive or otherwise harmful.

Despite its prevalence, pornography has proven to be difficult to define, as there is a general lack of agreement over exactly what constitutes pornography, and the definition is largely influenced by the time and context. For example, a picture of a naked individual in a magazine such as National Geographic would typically not be considered pornographic, because it is not designed to elicit sexual arousal (regardless of the fact that someone may become aroused when looking at the photo). A photo featuring an individual in the same stages of undress will likely be considered pornography, however, when it is displayed in the pages of an adult magazine that is intended to elicit arousal.

Some people draw a distinction between pornography and erotica, with pornography typically considered to be more violent, immoral, or representative of unequal power in sexual relations. Representations of sexual behavior have existed for many centuries and in many cultures; it is the definition—and function—of pornography that has changed over time.

Why Do People Use Pornography?

People typically use pornography as a way to experience sexual excitement and gratification. It can be a way for individuals to experience sexual pleasure and satisfaction free from the responsibilities of a partner or committed relationship or to fantasize about acts they might not wish to engage in with a partner. Many couples may view pornography together (or separately, with the other’s knowledge) as a way to enhance their sexual relationship.

Can Pornography Have Harmful Effects?

Pornography is consumed widely by individuals throughout the world, but many consider it obscene, addictive, or otherwise problematic. Opponents of pornography argue it contributes to sexual violence, oppression of women, and relationship problems. Further, because the images and acts displayed in pornography are sometimes unrealistic, viewing such material may leave an individual feeling disappointed by actual sexual encounters.

Excessive use of pornography by one partner has also been linked to decreased self-esteem in the other partner. Pornography may become especially problematic between partners when the use of it is secretive and/or leads to dishonesty and trust issues.

Research has shown that use of pornography is not always harmful and that it can, in fact, have some beneficial effects. Partners in couples who use pornography together have reported a relationship climate that is high in eroticism, in which they experience increased comfort expressing and acting on their sexual desires.

One major argument against pornography is that it perpetuates the objectification and exploitation of women. Some pornography depicts women being dominated or degraded by men or as victims of violent sexual acts. When the subjects of these pornographic images are not participating consensually, such as when victims of sex trafficking are forced or coerced to pose or perform, this becomes a serious and valid cause for concern, and many groups are working to help these individuals and end the production of pornography that is not made with full consent of all parties involved.

The lack of comprehensive sex education in the schools of some countries has long been a concern. Even when comprehensive sex education is provided, it can be largely heteronormative and may exclude LGBTQ+ individuals. Some parents who are aware of this lack choose to have frank discussions with their children or provide them with books on the subject. Others may talk to their children about sex but focus solely on reproduction and leave certain details out. Still others may avoid the discussion altogether, due to embarrassment or because they feel the child is not yet ready. As a result, teens and young adults who receive little to no information about sexual behavior and activity may increasingly turn to pornography to learn about sex. Sixty percent of college students surveyed in one British study reported using pornography as a form of sex education. While it can be empowering for young people to have access to information about sex, learning about sex from pornography, heterosexual pornography in particular, may lead to unrealistic expectations and problematic standards—though out of the students in the aforementioned study, almost 3/4 reported an awareness of the more unrealistic aspects of porn.

How Can Pornography Be Beneficial?

Research has shown that use of pornography is not always harmful and that it can, in fact, have some beneficial effects. Partners in couples who use pornography together have reported a relationship climate that is high in eroticism, in which they experience increased comfort expressing and acting on their sexual desires. Proponents of pornography believe it often has the effect of enhancing sex lives and providing a safe outlet for sexual expression, whether couples view it together or view it individually but maintain communication about its use.

While some point to pornography as one factor in sexual violence, some research shows it is in fact correlated with a decrease in sexual assault. After pornography was legalized in Denmark, researchers saw a decline in sexual aggression. Evidence also suggests that portrayals of women in heterosexual pornography are changing, with the power relationships shown becoming more equal in nature.