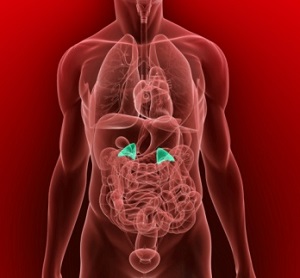 The adrenal glands—also referred to as the suprarenal glands—are a part of the endocrine system. The two glands are located on top of the kidneys.

What Do the Adrenal Glands Do?

The adrenal glands, like all endocrine glands, secrete hormones directly into the bloodstream. Hormones are chemicals that carry signals from one area of the body to another. The adrenal glands primarily release hormones related to stress and anxiety, including epinephrine, adrenaline, and cortisol. The adrenal glands also release androgens (sex hormones) that play a role in the development of male sexual characteristics and can be converted into estrogen in females.

Cortisol in particular is increasingly recognized as an important contributor to chronic stress. When produced in small quantities in response to stress, cortisol can help the body maintain health and homeostasis. When the body constantly produces cortisol in response to stress, however, systemic illness may occur. People may also experience chronic anxiety, high blood pressure, and other health problems.

Conditions associated with the adrenal glands can cause a variety of serious physical ailments. Adrenal diseases include: