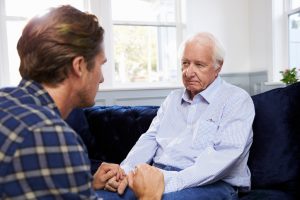 I have heard this sad statement from so many people who come to treatment struggling with terrible feelings about themselves. Typically, these “bad person” feelings are about having thoughts, wishes, or behaviors that have (or could potentially have) a negative impact on others, especially significant others. In order to fend off these feelings, people have lived their lives trying to prevent the experience that they are the cause of someone’s unwanted feelings: it is intolerable to consider that some statement they made or action they took could cause hurt, anger, disappointment, or any negative feeling. Such unacceptable reactions are “proof” that they have caused harm and are thus bad.

Expectations for behavior in families are learned early. When standards are dichotomized into either good or bad, children come to characterize not only their behaviors, but their personhood, as good or bad. For optimum development, children need positive responses from their parents. Reciprocal feelings of pleasing, loving, admiring, delighting in, kindness, etc., between parent and child are building blocks for self-esteem and self-confidence.

In some families, “being good” is the only way to assure the receipt of positive feelings. But positive feelings are not enough for development into people who know themselves and are not fearful of relationships in the world. Children also need to learn to tolerate and manage negative feelings, both when they are directed toward the child and when the child wishes to express them to others. Children are seriously disadvantaged when parental expectations require them to have only positive feelings and ideas toward parents. If all negative expression to a parent is unacceptable or seen as harmful or destructive, the child must be vigilant: it becomes necessary to safeguard their internal world either by containing any negative feelings or by dissociating these feelings, creating unconscious certainty that they will not inadvertently be expressed. Any sense of oneself as harboring negative feelings toward a parent runs the risk of “bad person” feelings.

The Need to Excuse Parents’ Behaviors

The three people I am about to describe are struggling with the emergence of negative thoughts and feelings toward a parent. These intolerable feelings and the growing awareness that their reactions to parents (e.g., hurt or disappointment) may have some legitimacy create anxieties they are unprepared to deal with. One method for defusing the discomfort is to conceptualize the parent’s behavior in a context that makes the behavior rationally understandable and therefore acceptable. The rationales essentially excuse parents’ behaviors so that the person in therapy can disavow their own “bad person” feelings. Often, anxiety about their own negative thoughts or feelings toward a parent begins or is exacerbated when another significant other expresses negativity toward the parent.

Conrad has described how difficult his work life has been. He has little ability to take initiative at work or in his relationship with his wife. In general, he has trouble asserting himself in the world and struggles to think about what he wants and how to get it. This makes considering different work or how to better his relationships problematic. He lacks self-esteem and is vulnerable to feeling like he has done something wrong.

Conrad is remembering how his mother talked to him about his major in college: “She was always so helpful. She told me I was good at art, but I had to be practical and plan for a career which would enable me to take care of a family. I listened to her and went into finance. Ten years later, as you know, I hate my work, but I know she was only thinking of me. She lived through hard times as a kid, so my being secure financially is especially important to her. She only wanted what was best for me, and I can’t bear to feel that I cause her pain or disappoint her. I would feel so mean.”

Allowing the emergence of previously intolerable and unwanted feelings provides tools—not only for developing the self, but for the development of the self in relationship. Knowledge of feelings is a tool which can help address internal and external conflict. This means one has new and more information to decide both how and, sometimes more importantly, if to act.

Monica is depressed and anxious. She struggles with her son, who she feels rejects her and has become contemptuous of her relationship with her mother. This is intolerable for Monica, who has dedicated her life to taking care of others and making sure no one has any bad feelings because of her. Monica came to therapy because of how torn she is between trying to please her son and trying to make her mother happy. This internal and external tug-of-war is ruling Monica’s life, and there is little room for Monica to consider herself. In fact, before Monica began therapy, it never occurred to her that she should be a consideration. Monica is unable to act in any way that would make her feel she hasn’t done everything her mother expects of her.

Monica is tearing up as she tells me: “My son Rick never wants to visit my mother when I visit her. Mom is getting on in years and won’t be around much longer. I tell him he really hurts her feelings and upsets her when he doesn’t visit or call. He tells me it’s boring to visit and he hates that she always criticizes him and tells him what to do. I know that’s true, but I try to explain that she is very interested in his life and wants to make sure he does things right. Her heart is in the right place. It upsets me. I feel like I’ve done something wrong when my son behaves this way. I’m a bad mother and a bad daughter.”

Alan’s wife Nancy and his father always get into arguments. Nancy tells Alan that she doesn’t like the way his father talks about women and that his father hates women. It distresses Alan that she won’t keep her feelings to herself. Each fight between Nancy and his father throws Alan into an anxious frenzy: “Nancy is so mean to him. He loves her, but she doesn’t care. He does condescend to her, but it gets him very agitated when they fight. I worry he’ll have a heart attack. Why can’t she just keep quiet and understand he is a good dad and would never do anything to hurt us?”

Alan is a man in serious conflict. He adores and admires his father, but he frequently turns himself into a pretzel to provide for his father’s needs and wishes without feeling he is abandoning his wife. As he tries to provide what she needs and what his father needs, there is little consideration of what he desires. He has recently become aware of how it might be dangerous to know what he wants: “I think I would feel even more tortured if I had to choose between Dad, Nancy, and myself. But it’s getting harder and harder to feel I don’t exist as a person except to be there for the people I love. I know if I choose myself, it will confirm how selfish I am.”

Letting Go of Excuses and Feeling the Feelings

Conrad, Monica, and Alan could not tolerate negative feelings about their parents. All three felt at risk for feeling like awful people. They were stuck in their lives and limited in the choices they could make. In our work in therapy, it became important to recognize the pattern of excuse making and develop the awareness of anxiety that accompanied any leakage of negative thoughts and feelings about their parents. These three people began to connect how hard they worked to avoid unwanted feelings about their parents with how those feelings made them feel like bad people. They also began to recognize the connection between how their limited ability to tolerate feelings had affected their self-esteem and self-confidence as well as their ability to be autonomous in the world. They worked to let go of the excuses and make room for more authentic experiences in their relationships with themselves and, to some extent, with their parents.

The process of letting go of excuses to preserve positive feelings can produce intense anxiety as the letting go lessens the defenses and makes room for the “bad person” feelings to emerge. At the same time, the possibility for a less black-and-white palette for feelings becomes possible. As one begins to consider that there is a broad continuum between being “good” and “bad,” one can also begin to realize that having a negative feeling doesn’t automatically define one’s character. Recognition that having a wide range of feelings at our disposal makes us human becomes an important lesson in the therapeutic process. Becoming human is about separating and individuating.

For Conrad, Monica, and Alan, the separation-individuation process advanced when they could allow thoughts that previously were unacceptable. First, their heads told them that their lives were not as they wished them to be. Then, as they allowed their gut to become operational, they could use it to experience feelings that in the past were blocked and dismissed. Having these feelings facilitates the processes of self-reflection and self-engagement which promote self-knowledge. Thus, Conrad began to learn he still could nurture his artistic self and began to plan opening an art gallery. Monica has come to feel more kindly toward her son and has begun to acknowledge he can express feelings that she is only beginning to allow for herself. Alan is accepting that his attention to his own needs is not selfish, and can actually show a small smile when he tells me he chose his wishes over those of his father or his wife.

For all three, allowing feelings nurtures the growth of the self and the development of identity. They are discovering, “Who am I? Who am I in relationship to the world? What do I think, feel, want? What do I want to do?” Their need to block their feelings by making excuses is diminishing. Allowing the emergence of previously intolerable and unwanted feelings provides tools—not only for developing the self, but for the development of the self in relationship. Knowledge of feelings is a tool which can help address internal and external conflict. This means one has new and more information to decide both how and, sometimes more importantly, if to act.