What Happens When Children Don’t Individuate in Adolescence? 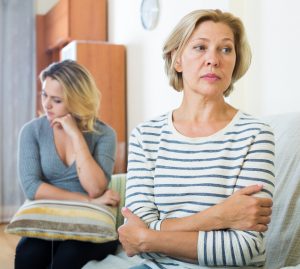 I work with a number of anguished parents who are surprised, hurt, and bewildered by changes in the way their adult children behave toward them. They describe relationships filled with coolness and irritation from their adult child and talk about being rebuffed when emails, texts, and phone calls go unanswered and responses to requests for dinner or birthday celebrations are ignored or refused. These parents feel pushed away and controlled by their children and clueless to understand this unexpected behavior. They come into therapy filled with a wide range of feelings, including rejection, anger, hurt, anxiety, depression, and helplessness.

Melanie came to see me because of difficulties with her oldest child, Barbara, 33, who is five years married with two young children.

“She was my first, and it was love at first sight,” Melanie said of Barbara. “We were so close. I don’t understand the change. It seems sudden, but I suppose it started after college when she became a little distant and there was some tension. Now I can’t say ‘boo’ to her without her becoming annoyed or angry. I’m always walking on tiptoe and never know when she’s going to have an outburst. She’ll yell and say awful things like I don’t understand her or I’m self-absorbed or the queen of criticism. I can’t imagine why she feels this way. I go from shock to crying to feeling outraged. I don’t know what she wants from me. Actually, it feels like she doesn’t want anything from me. It’s getting more and more difficult to get to see her or even get her to send me a picture of the grandkids or answer a text. When she ignored my birthday last month, that was the worst.”

Melanie’s experience with Barbara is illustrative of what the distressed parents I work with describe: through adolescence they had close, loving relationships which became conflicted only after their children left home. The separation-individuation process which is expected to occur in adolescence didn’t emerge at the developmentally appropriate time. Without the benefit of individuation in adolescence, these children missed the experience of learning to navigate the power struggles and clashes with parents that are crucial for the formation of a sense of identity with feelings of autonomy and self-confidence. This experience is necessary to set the stage for feeling comfortably attached to the parent without fear of being controlled or influenced.

The Development of Saying Yes to Oneself

I have always been intrigued with the idea that 2-year-olds have to learn to say “no” before they can say “yes.” The “no” of the 2-year-old is a crucial component of the development of self. “No” is directed to the parent who engages with the child in a squabble. When there are wins for the child, their “no” is accepted, making it possible for the child to begin feeling authorship of their “yes.” “Yes” is a nod to the self, to one’s desires, needs, and drive toward autonomy.

During adolescence, this process continues. Now the parent has to shift from the position of benign authority they held with their younger child. They must find a balance between providing rules within a secure and safe framework and simultaneously allow room for the emergence of the adolescent’s “noes.” This means the child is given space to question and change the rules (although the parent will not always agree) as they move toward “yes,” i.e., developing their identity as autonomous adults.

For some children, the struggle to individuate either begins or intensifies after adolescence, often during their late 20s or 30s. When this occurs, a strong need to pull away and extract oneself from the parental orbit feels necessary.

For parents who have not experienced the passionate conflicts of adolescence and may be known to happily remark “I got off easy,” their adult child’s fierce push to be separate can be heart-wrenching. When there is a delay or a reemergence of this struggle for autonomy, the parent is frequently taken by surprise and is unprepared for what may now become an intense process of individuation in which the adult child, no longer feeling required to adhere to the old rules, comes out fighting to claim a selfhood that will feel unfettered by parental influence. It can seem very sudden when a child starts to pull away, express anger, and assert themselves against the parent. Although the parent may be unaware of treating the child differently, what might have felt to both parent and child like interest or involvement in the past can now be experienced by the child as controlling or critical.

As I got to know Melanie and learned about the development of her relationship with Barbara, it became clear that Barbara was late in separating from her parents. Through late adolescence, Barbara never went through a stage where she pushed against her parents. When she went away to college, she remained close with frequent calls and emails. Between her junior and senior years, however, she and her parents fought over her decision to remain at college for the summer to take an internship. This was the first big disagreement with Barbara where Barbara’s wishes won out. Melanie wondered:

As I got to know Melanie and learned about the development of her relationship with Barbara, it became clear that Barbara was late in separating from her parents.

“I’m not sure about this, but I think things changed after that. She never lived at home after graduation. She stopped asking for advice, and I was so surprised when she decided to move to a neighboring state for grad school. Maybe I shouldn’t have said I thought she should stay local for school, save her money, and live at home. She had made up her mind, and I remember she got angry and said I shouldn’t tell her what to do with her life. I was shocked. I was only trying to help. Since then, she bristles or gets angry at any suggestion I make.”

Melanie was feeling profoundly rejected by Barbara. She felt helpless to know how to relate to her and how to change the increasing negativity she felt from her daughter. She felt controlled and without any clear sense of why this was happening:

“I can’t ask questions without her getting enraged,” Melanie said. “I asked if she took my granddaughter to the doctor when she had a fever and she told me to stop butting in! I’ve asked her such innocuous questions, like ‘Are you planning a vacation?’ Or, ‘Are you thinking about sending the kids to daycare?’ Every time I ask a question, she accuses me of criticizing her. I don’t get it. I just want to be a part of her life. She doesn’t want to let me in. Worse, sometimes I think she hates me.”

It seemed to me Barbara’s individuation process had been delayed. I assumed that since there was little conflict with her parents during adolescence, Barbara’s “noes” and “yeses” were probably mostly shared by her parents. Thus, in adolescence, Barbara would have felt no need to differentiate her wishes and needs from those of her parents. Now, as an adult, she had no developed sense of self with feelings of autonomy. So she still needed to individuate and take ownership of the “yeses” and “noes” in her life. This would give her a sense of agency and self-confidence, enabling her to feel less threatened by her mother’s opinions, wishes, and needs. Differences between them would simply be differences, not cause for concern about losing herself to her mother’s influence. She would not have to be worried about being controlled because she would feel in charge of herself.

Melanie began to understand that Barbara equated connection with influence. She recognized that Barbara’s experience of being constantly criticized became the rationale for pushing Melanie away:

“I think I get it. If I ask a question, like did she take my granddaughter to the doctor, maybe she hears it as my opinion: ‘You should take her to the doctor.’ Or maybe, she hears it as ‘I don’t trust you to know what to do’ so then she feels criticized by me. I see she is fighting being influenced by me. It’s like if she lets me in, she loses herself. If she lets herself feel close to me, it threatens her sense of self. I don’t want to be in her life to control or influence her, I just want to love her and feel loved. How is that ever going to happen?”

Facilitating Individuation for the Adult Child

Melanie’s feelings of helplessness were palpable. She was developing an intellectual understanding of what was going on with Barbara, but it is quite another thing to find a way to change the dynamic between them so their bond could be restored. I made the following suggestions to Melanie: