‘I’ Messages: How Removing ‘You’ Can Change a Conversation 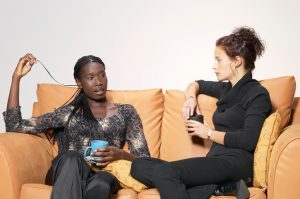 Assertive communication is a style of speaking in which the goal is to take care of your needs while also showing the other party mutual respect. An important form of assertive communication is known as “I” messages or “I” statements. “I” messages clearly state what you want in a way that someone will understand and, more importantly, not get defensive. When people are defensive, they may get angry, accusatory, or ignore parts of what you are saying.

When you use “I” messages, you focus on your personal interpretation. Your experience is harder to argue with because it’s yours and yours alone. Someone might not agree with how you interpreted a behavior, but they are less likely to feel personally attacked by you expressing the experience as your own. As a result, “I” messages tend to reduce the likelihood of someone feeling criticized and may increase their likelihood of changing a behavior.

Roll your cursor over the text below (or click if you’re using a mobile device) to see examples of complete “I” messages:

I feel state feeling when state the behavior because state why. I would prefer we state preference or replacement behavior.

How ‘I’ Messages Work

An emotion is one word. If you say, “I feel like you aren’t listening to me,” that’s not a feeling. Feelings may include: anger, frustration, confusion, guilt, encouragement, gratitude, happiness—you get the point. When you begin a conversation with “I feel” and then express an emotion, you are putting your perspective first. This reminds the person you are talking to that this is how you feel and not about what they did to you.

Once you have expressed the emotion you are feeling, describe what happened. Try to avoid saying “you” whenever possible. Again, this is about keeping the other person’s defenses down. Instead of saying, “I feel frustrated when you leave the dishes in the sink,” say, “I feel frustrated when I see dishes in the sink.” As another example, instead of, “I feel left out when you make plans without asking me,” try, “I feel left out when I’m not included in plan making.”

After you get the feeling and specific behavior down, you will want to explain why the behavior made you feel that way. This helps the person you are speaking to better understand why it’s so important. It might sound something like this: “I feel left out when I’m not included in plan making because I like to be aware of the schedule.”

Finally, provide a suggestion to take the guesswork out of what you need in the future. Using the last example, a replacement behavior might sound like, “I feel left out when I’m not included in plan making because I like to be aware of the schedule. I would prefer if you could send me an email before committing to our friends.” Sometimes there might not be an immediate solution, but even saying, “Can we talk about this further?” can be a good start.

The opposite of an “I” message is a “you” message. “You” messages often sound accusatory and tend to put people on the defensive. As soon as someone hears “you,” preparing for an attack is a common reaction. The goal of “I” messages is to diffuse that possibility, and instead enable a more meaningful discussion.

Here are some examples of “you” messages versus “I” messages:

The true goal for utilizing “I” messages is to improve your overall communication to one of mutual respect and increase your confidence when speaking about touchy subjects. “I” messages take practice, so be patient with yourself as you get the hang of it. Over time, you will hopefully notice a reduction in petty arguments, criticism, and defensive reactions.