How to Understand and Address Adolescent Sexting 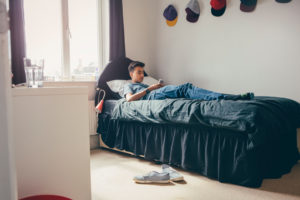 One of the most difficult issues I see today for parents is sexting—the sending of sexually explicit messages, pictures, or videos via text message. Texting in general has only existed for the past 15 to 20 years, and because it is still so new, parents usually don’t have a reference for it from their own childhoods.

Children are using devices more than ever to connect with one another. Some studies indicate that almost 80% of adolescents ages 12 to 17 own a cell phone, and almost 50% own a smartphone. Many of the apps that children use to communicate are rapidly changing and unfamiliar to adults. The lack of familiarity can create a sense of helplessness for many parents, which may make this issue a particularly difficult and scary one. To help with this, I’ve created a guide to hopefully make the issue of sexting less overwhelming for parents.

To begin with, one should consider why children sext. Studies show most children say sexual messages are initially sent as a sign of love. For many teenagers, sexting can act as a courtship and even as a replacement for sex itself. These messages can be a way to express and gain admiration from a crush. Sometimes peer pressure plays a role, as children are pressured into sending a message they are not completely comfortable with.

The risk of sending a sexual message is that once it goes out, the sender has little to no control over who sees it. In 2009, there was a case in Pennsylvania in which a high school girl’s phone was confiscated by a teacher who found semi-nude photos stored in the phone and turned it over to authorities.

Instances such as this teach us that even if a message is intended to be private, there is no guarantee it will stay that way. Children and teens should understand that anything they send into the digital world—a text, a message on social media, or even an email—might be seen by others. Teaching children about the risks also sends the message that the adults in their lives are available and willing to help.

Here are five steps parents can take when dealing with children or teens who are sexting.

I think it is completely understandable and natural for parents to be deeply disturbed when their children send these types of messages, and acknowledging these feelings is often a good place to start. At times, the anxiety around this issue can become so overwhelming that it is difficult to see any ways to help. I encourage parents to discuss their children’s use of technology and the feelings surrounding it. Therapy can also provide an outlet to process some of the difficult reactions this issue brings up.

2. Recognize Core Issues Have Not Changed

Once parents have processed their initial reactions, I encourage them to try to see these messages as an expression of feelings that function similar to love letters from earlier times. As discussed earlier, the factors that generally cause adolescents to sext—teenagers in relationships, seeking approval from peers, and peer pressure—are hardly new. Most parents have vivid memories of grappling with these issues as adolescents, and recognizing those reference points can be empowering. This can help parents to relate more to their children and make the issue less foreign.

3. Realize What Will Not Solve the Problem

It is important to remember that children often get a lot of benefits from connecting with peers through their devices. These connections serve an important developmental purpose, and simply taking away a child’s phone or shutting down their social media accounts often does more harm than good. Children are surprisingly adept at getting around these types of limitations as well. Don’t assume the problem is fixed by trying to restrict their communication avenues.

For many teenagers, sexting can act as a courtship and even as a replacement for sex itself. These messages can be a way to express and gain admiration from a crush.While children are well versed in technology, they often lack the emotional maturity to process the potentially negative things that can happen in the digital world. This is an area where parents can be enormously helpful. I encourage parents to make themselves available to process the difficult feelings and reactions their children have related to their online experience. The more children perceive their parents as available to talk about these feelings with them, the more resilient they will be when they are exposed to something negative.

5. Encourage Other Avenues of Self-Expression

The last step is to help children find other avenues to connect with their peers. Steering a child toward a club, activity, or sport enables them to connect with friends, and freeing up time in their schedule to spend with kids their age may make them less likely to seek connections online. The more children are allowed to connect to others face to face, the less likely they will be to try and fill a void in the digital world.

Because technology has changed so dramatically in the past several years, parents and children are at risk of becoming disconnected. If parents are able to reflect on this issue, understand the reasons their children use devices, and come to see how children may be struggling with many of the issues their parents dealt with in childhood, they may be able to help their children find healthier and more productive ways of meeting their emotional needs.