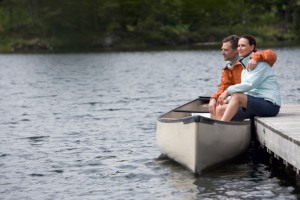 Recent statistics show that the average couple experiencing difficulty waits six years to seek therapy, which may be too late for some couples, as 40 to 50% of marriages across the United States end in divorce. Some couples opt for marriage retreats in which a couple engages in intensive therapy over several days with the aim of reaching resolution and repair. Although they are often viewed as a “last chance” to save a marriage, marriage retreats are also attended by couples who are not facing conflict but simply wish to deepen the intimacy in their relationship.

On a retreat, couples can get away from their daily routines while attending therapy sessions that focus on their combined strengths and difficulties. The concept of the marriage retreat is depicted in a number of feature films that conflicted couples taking a break from their lives, either on a therapist-prescribed retreat or a more typical getaway, in an attempt to save their marriages. Unfortunately, media depictions of many of life’s challenges are often oversimplified, and marriage retreats and couples therapy are no exception.

How Does Hollywood Get It Wrong?

In film, marriage retreats are typically presented as lighthearted fun, potentially misleading viewers about the true nature of a marriage retreat. In an article for ABC News, Debra Margrave, who runs Sedona Soul Adventures with her husband, says that the goal of their marriage retreat is bringing people together, and that the “crazy stuff” in Hollywood movies is more comedic than factual. Cinematic portrayals of both the couples and the retreat itself are often idealized, made humorous, and belie the amount of real work necessary in couples therapy. Though infidelity and intimacy issues affect the fictional characters, and they seem able to reach forgiveness or move past the problems, the underlying causes are rarely addressed, meaning any progress made is likely only a temporary reprieve.

In reality, marital issues can often lead to mental health concerns, such as stress, anxiety, or depression. Although the 2012 romantic comedy Hope Springs shows a couple with intimacy issues who, through therapy, is able to repair their relationship after several failed efforts, most films, such as For Richer or Poorer (1997) and Why Did I Get Married (2007), emphasize the outrageousness or comedic value of a couple’s difficulties instead of focusing on the more realistic aspects of marital conflict that a couple in counseling is likely to face.

Media depictions of many of life’s challenges are often oversimplified, and marriage retreats and couples therapy are no exception.

Communication issues affect many couples, and one of the goals of a retreat may be the exploration of better ways for a couple to reach one another. Because a marriage retreat places partners in a situation where they can focus solely on improving their relationship, couples may more easily work on developing better communication skills. In films, though, the couples featured often achieve insight by speaking to outsiders, or they spend time talking to friends about their partnerships and engaging in activities where the focus is not on building communication with partners.

When building and enhancing communication skills does not occur, any progress that a couple makes in their relationship is likely to be superficial rather than a lasting improvement. Take the films Why Did I Get Married and its sequel, Why Did I Get Married Too? (2010), for example. Both films feature four couples attempting to work on their marital issues during a self-designed week-long retreat. They spend much of their time arguing, but at the end of each film, three out of four couples have resolved their issues and made up. The reparation of these marriages, shown to be troubled from the beginning of each film, seems to have occurred more from spontaneous revelations and apologies rather than actual communication and resolution. Couples who admit wrongs and apologize can resolve some difficulties by doing so, but those who experience the same types of conflict repeatedly may benefit from some sort of marital counseling.

Richard Simon, editor of The Psychotherapy Networker, says in a New York Times article that couples therapy is widely acknowledged as one of the most difficult types of therapy. Therapy on a retreat may be even more difficult, as therapists generally do not have a prior relationship with the couples. Instead, therapists must discover areas of conflict and assist the couples through individual or group therapy, or both, to rebuild a strong relationship in only a short period of time. Therefore, a good therapist may be the most important component of a successful marriage retreat, but therapists depicted on screen are often not shown as realistic or entirely ethical.

The lead therapist in Couples Retreat is not completely honest about the true purpose of the resort the four couples in the movie visit, for example, and he forces three of the couples to attend therapy when they did not originally wish to. The 2014 film The One I Love also features an unethical therapist who traps couples repeatedly in a bizarre situation in an attempt to force them to work out their issues. Although this movie has a science fiction element and would likely not be considered to be realistic by many viewers, the portrayal of an unethical therapist might still lead some to be reluctant to seek marriage counseling or venture on a marriage retreat.

Marriage retreats may be appealing in part because they offer a change of scenery, bringing a new perspective with a new environment, but couples who cannot afford a trip to a mountain cabin, the Sedona desert, or a tropical island—the setting for Couples Retreat—might just as easily discuss factors affecting their partnership in a motel conference room or some similarly simple setting. Granted, a conference room does not offer the allure of a tropical island, but without distracting activities such as swimming with sharks, as the characters in Couples Retreat do, couples are free to focus on a faltering partnership.

A number of films depict partners who do not go on a formal retreat, but rather, find themselves in an unlikely situation that allows them to work on and save their marriage. For example, Wanderlust, a 2012 film, tells the story of a couple who is able to repair their troubled marriage after a two-week stay at a free love commune. And in For Richer or Poorer, a couple successfully saves their marriage after a short time living a simpler life in Amish country. These couples repair their marriages simply by rediscovering feelings of love for their respective partners. While some real couples may be able to repair their marriages in such a manner, the reality of marriage counseling is that it often takes time and hard work, which may be difficult or painful for one or both partners.

Although a marriage retreat might be beneficial to couples of any socioeconomic status, the majority of couples seen attempting marriage retreats in the media are all relatively affluent. Because films that show positive resolutions of marital difficulties may inspire some to attend therapy in hopes of resolving their own difficulties, better representation of a wider range of society is needed. Research shows that low income is a factor in many divorces, so the portrayal of high-income couples in the media may be both limiting and unrealistic.

There is also a general lack of diversity in Hollywood’s depiction of marriage retreats. White characters are prominent (though Why Did I Get Married? and its sequel have a black cast), and there is a clear tendency toward heteronormative relationships. Although in recent years, the number of non-heterosexual couples in the media has increased, the couples featured in films showing marriage retreats are heterosexual, which might give an impression of ignoring the existence of a significant portion of the population. Non-heterosexual couples are likely to face the same issues that heterosexual couples do, and their absence in the media contributes to the unrealistic portrayal of marriage retreats. What’s more, there is little variety in body type shown, a recurring area of concern in Hollywood films.

Can A Marriage Retreat Save Your Marriage?

Hollywood films appear to give the message that marriages can be fixed in a weekend, but this is often not the case. Marriage retreats seen in the media may seem fun, more like a vacation than counseling, but the truth is that a couples retreat, like couples counseling, can be intense and tough. Couples may find themselves facing confessions of infidelity, fading feelings, and other harsh truths. They may be able to resolve issues by building communication skills or by exploring ways to rekindle physical and emotional intimacy. Drs. John and Julie Gottman of Orcas Island, Washington, state that couples will learn skills to “transform inevitable relationship conflicts into constructive problem solving and warmer understanding” on their two-day retreat. Some couples might achieve a different kind of clarity on the retreat and realize that their relationship may be best ended. No matter the case, retreats can be helpful to couples, both as a starting point to therapy and as a supplement to marital counseling.

Those considering a marriage retreat may wish to research the retreat itself, as well as the therapist conducting it. A marital counselor may also be able to recommend a retreat to an interested couple. The goals of any retreat and the services that are included, such as the amount of counseling hours provided as well as the type and length of sessions, should be clearly stated. Different types of retreats, with varying costs, are available to those who are interested: They might even be found close to one’s home. A trust-building exercise on jet-skis may seem like a fun activity, but it is not a realistic one for many couples. While a marriage retreat can still be enjoyable, it will often also be intense work that provides a basis for more work in the future.