Children with ADHD May Be More Sensitive to Punishment 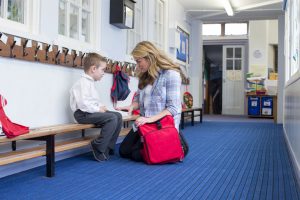 Children with attention-deficit hyperactivity (ADHD) may have an impaired tolerance to being punished, according to a new study published in the Journal of Child Psychology and Psychiatry. The finding could have implications for several areas of study, including behavior modification and neuroscience.

Children with ADHD often run into problems with people in supervisory positions because of their symptoms. Distractibility, fidgeting, and apparent daydreaming are just a few of many potential behaviors associated with the condition that can be perceived as disruptive and result in punishment from authority figures. The research shows punishment-based behavior correction can have unexpected consequences for children with ADHD.

The study included 210 children, 145 of whom were diagnosed with ADHD (the rest participated as part of a comparable control group). Each child was placed in front of a computer with two game options visible on the screen at all times. They were then given time in which they could play either game as much (or as little) as they liked. The games were almost identical (the player could gain points as a reward for correct responses), except in one option there was a fourfold greater chance of being punished by having points taken away for giving incorrect answers.

Both groups of children showed a tendency to play the less punishing game more often. This trend remained relatively stable until about 100 trials were completed by each child. At this point, there was a significant increase in the number of ADHD-diagnosed children choosing to play less of the game that had an increased rate of punishment, suggesting children with ADHD tend to avoid punishment more often than children not diagnosed with ADHD.

Motivational Systems in Children with ADHD

Some might say these findings validate persistent punishment as an effective means of behavior control in children with ADHD, but the study’s authors say there are some important caveats to consider. First, punishment is generally not advised as a form of behavior modification due to a high risk of causing more harm than good.

Additionally, the change in behavior (choosing the high-rate punishment game less often) occurred despite the rate of reward staying the same in both games. The researchers say this is not typical of developmentally sound decision-making processes and could indicate a wider problem with the brain’s motivational system in children with ADHD. They may be more sensitive to and focused on punishment, while other children are generally more focused on reward.

The study’s authors suggest frequent rewards and incentives may be an effective way to give children with ADHD what they need to seize opportunities for success, especially if they view a task as requiring a great amount of effort.