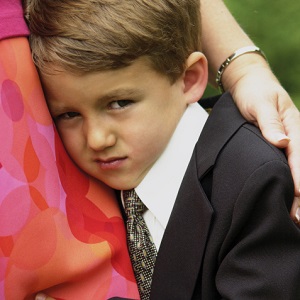 It’s fairly common to see a child sheepishly hide behind a parent when greeting a new person, and some adults vividly remember the anxiety they experienced in childhood upon entering new environments. Recently published research, which tracked children over 15 years, argues that shyness isn’t just a personality quirk. It frequently indicates anxiety, and is often a precursor to high fearfulness in adulthood.

Koraly Pérez-Edgar is a developmental psychologist who began studying children’s social interactions when she was a postdoctoral fellow. She found that children who displayed extreme shyness were more likely than other children to face anxiety as adults. A brief moment of trepidation meeting a new person wouldn’t rise to the level of such shyness, but a child who lurks anxiously in the background in an attempt to avoid other children is displaying severe inhibition.

Drawing upon previous research,Pérez-Edgar calls extreme shyness a form of behavioral inhibition. This inhibition involves more than just a case of nerves about trying something new. The personality trait appears as early as infancy, and involves an ongoing fear of new stimuli. Most babies might startle in response to a jack-in-the-box, then laugh as they realize the toy isn’t dangerous. Behaviorally inhibited babies are more likely to panic and cry.

For children with behavioral inhibitions, meeting a new person is just one more frightening stimulus. These children aren’t just shy. They’re displaying a temperamental quality that is stable across the lifespan and a relatively accurate predictor of adult fearfulness.

Drawing Children Out of Their Shells

Behaviorally inhibited children tend to limit their own environments, giving them few opportunities to practice social interaction—a behavior that can make anxiety even worse. Consequently, Pérez-Edgar isn’t sure whether behavioral inhibition is an innate trait that appears early in childhood, or a learned disposition that shy children practice daily.

She wants to help shy children overcome their inhibitions, in the hope that doing so might reduce adult anxiety. In a new study, she and her colleagues are using behavioral therapy to help ease children’s anxieties. By drawing children’s attention to something other than the source of fear, researchers hope that they might train the brain not to fixate on sources of anxiety. If the approach works, it could work to undermine the connection between early shyness and adult anxiety.