Can Playing Violent Video Games Cause Aggression in Adults? 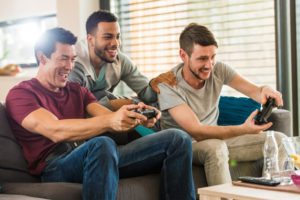 The role of video games (particularly violent ones) in aggression is an ongoing subject of scientific debate. Most research has focused on the effects of video games on children and adolescents. A new study published in Molecular Psychology analyzes how video games affect adults. The study found daily play of violent video games is not linked to long-term aggression in adults.

According to the study’s authors, these findings contradict the 2015 American Psychological Association (APA) report on video games. The APA review found a link between violent video games and increased aggression. Yet many critics argued the report was based on flawed research and a poor understanding of the role video games have in the lives of young people.

Research published in 2016 suggests parents and kids can benefit from playing video games together. A 2018 study found violent video games do not prime for aggressive behavior.

To weigh the long-term effects of violent gameplay, researchers analyzed 77 participants. The average participant age was 28. About half of recruits were female. While participants knew the study was about video games, they did not know what researchers were testing.

Before the two-month period, researchers administered 208 tests. These tests measured psychological factors such as anxiety, impulse control, aggression, and empathy. At the end of the play period, the team repeated the tests. The analysis controlled for sex and age, since research suggests these factors can influence aggression.

Three of the 208 tests showed changes that might result in more aggression. The study’s authors dismiss these changes as coincidental. Overall, they found no significant changes in aggression between groups. In fact, they found no changes in any of the tested variables.

The researchers found no connection between violent games and aggression. Nor were these games linked to decreased empathy or impulse control. The study challenges the notion that violent video games cause lasting psychological harm.