Why ‘Toughen Up’ Doesn’t Cut It with Children and Teens 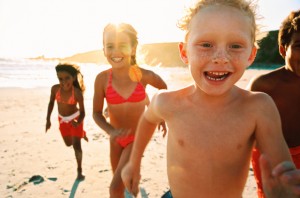 So often when I ask people in my therapy office (mostly children and teens) to brainstorm strategies for coping with certain difficult situations, the initial answer I get is something along the lines of “I need to toughen up,” “I need to just deal with it,” or “I’ve got to be a man.” The difficult situation itself could be a disagreement with a sibling, a problem with a peer, or an uncomfortable issue with a teacher at school.

Children pick up these quick-fix mantras from a variety of places—television, school, peers, and parents among them. When a child gets emotional, often the quick, easy fix is to say, “toughen up,” especially when whatever caused the child to be upset seems minor. The message is clear: Let’s move on, kid, because we’ve got things to do and worrying about this doesn’t fit into my schedule.

Is there anything wrong with that? What, if any, damage is done when a child is told to “toughen up”? Let’s break down the ripple effect this type of response has on a child’s psyche over time.

The biggest problem with telling a child to toughen up is that it undermines true resilience, which is learned by experiencing adversity or uncomfortable feelings, processing why they occur, and learning new and more positive ways to reframe those situations.

There is, of course, something to be said for “letting go” of certain minor situations that are upsetting. However, that needs to come from within the child and not from the belief that getting upset by something means there is something wrong with him or her.

Finally, a note about boys who think they need to “be a man” when something doesn’t go their way: The children I see in my practice who use phrases such as this are, in my experience, more likely to be aggressive in the responses they give others.

Aside from what it suggests about being a woman, the phrase “be a man” has a sense of machismo associated with it that indicates a need to be strong and aggressive. In today’s world, acting on this impulse (at school, for example) may lead to discipline problems and resolves few. It perpetuates stereotypes many boys may not feel they fill as adults and reduces the likelihood they will seek help for emotional or mental health concerns because “being a man” means ignoring those feelings.