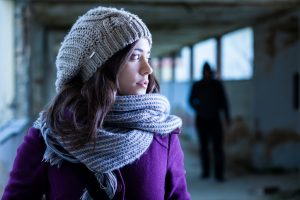 Being stalked can be paralyzingly frightening. Victims aren’t traumatized just once; they’re perpetually unsettled by attempts at contact and often begin to feel like there’s no safe place to go.

The Bureau of Justice Statistics reports that about three million people are stalked every year, most by people they know—often a former intimate partner. As many as 10% of stalking victims fear for their lives, and all victims face massive disruptions to their routines. While stalking, like domestic violence, has been around for generations, it has been only in recent years that the issue has been taken seriously, and many victims may be hesitant to seek help.

At its core, stalking consists of repeated attempts to gain control over or terrorize someone. Stalking exists on a continuum. On the lower end, it might involve repeated phone calls, letters, or email contacts. In its more extreme manifestations, however, stalking might involve repeatedly going to a person’s house, making threats against a person, harming pets, stealing possessions, or interfering with a person’s relationships with friends, family, or coworkers. Stalkers may alternate between patterns of domestic violence and stalking.

Each state establishes its own legal criteria for stalking. Laws generally require multiple unwanted contacts and mandate that a victim fear for his or her safety. A coworker who comes back to see a person at his or her office daily, for example, would not be stalking, and a secret admirer who sends flowers once per week is not necessarily a stalker. Repeated contacts rise to the level of stalking when they’re designed to gain power over a person and cause emotional terror.

Why Do People Stalk?

Stalkers often emphasize that they “love” their victims and occasionally say they stalk to keep others safe. For example, an abusive ex-husband might say he stalks his ex-wife to ensure she’s properly caring for their children. Psychologically, however, stalking is a crime of control. Stalkers see their victims as possessions who are rightfully theirs, and stalking behavior is frequently activated by a breakup or an ex-partner’s new relationship.

Some mental health issues can lead to stalking. People with personality issues such as a borderline personality diagnosis may have trouble letting go of relationships and sometimes use manipulative tactics to control people. Erotomania is a delusion in which a person believes that another person—often a celebrity—is in love with him or her, and this can lead to stalking. However, not all stalkers have mental health conditions, and the overwhelming majority are men. Cultural and gender norms may contribute to stalking behavior.

What Can Victims Do to Get Help?

If you’re being stalked, don’t make excuses for the stalker or tell yourself you are overreacting. Tell a friend or family member what’s happening so you have a support person and a witness. If you are in immediate danger or are being followed, dial 911. There’s no price for overreacting, but underreacting to stalking can, in extreme cases, be fatal. Other things you can do to remain safe: