Spanking: Where Does Discipline End and Abuse Begin? 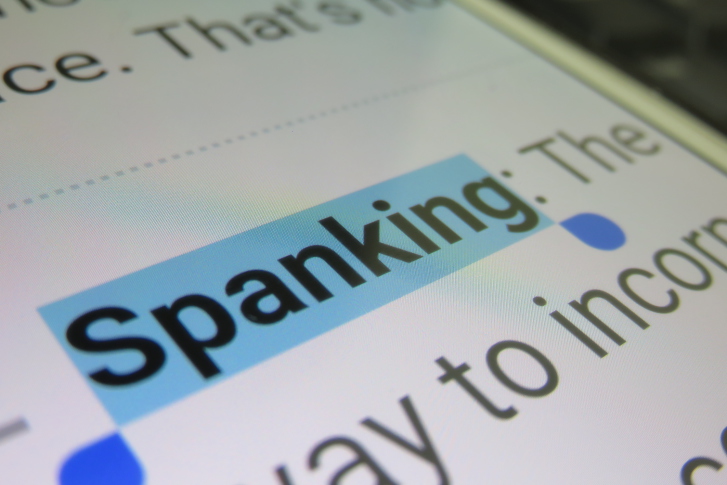 I am guilty of spanking my children. My oldest has been spanked once, maybe twice, in his entire 17 years. My 7-year-old has received a few prime swats, and other forms of discipline, in her short lifetime. My middle child, a 14-year-old boy, is much more intimately familiar with spankings. As an extremely hyperactive and unruly child, my son was constantly exploring things that were off limits and often dangerous. Undeterred by the threats of toy removal, time-outs, and other nonphysical forms of punishment, he pushed me to my limits and I resorted to the only other method I knew: spanking. At the tender age of 5, he was quite adept at “assuming the position.” He no longer covered his back end with his tiny hands, and as much as it drove me crazy, he developed a stoic resistance and would receive his spanking without so much as a tear.

Was this child abuse? Or was it merely discipline? According to the statutes of my state, Florida, I have not committed child abuse because I did not significantly impair my children’s physical, mental, or emotional health. But if I look at an exception in the same statute, it is not so clear. It reads: “Corporal discipline of a child by a parent does not in itself constitute abuse when it does not result in harm to the child.” So even though I subjected my child—actually, all three of my children—to corporal punishment at one time or another, it is considered abuse only if I harmed them.

But doesn’t a spanking cause emotional injury? Doesn’t bending over and getting smacked, pretty firmly, on the bottom cause physical pain? Doesn’t this type of action potentially result in a traumatic event for a child who has never been struck by a parent? Did I cause harm?

I don’t know where discipline ends and abuse begins. I know that I was spanked as a child. I know that sometimes I learned the lesson and sometimes I didn’t. But I also know that when I was young, the thought of calling the police and reporting my parents as abusers never even entered my mind, no matter how sore my butt was.

Times changed as I grew up. Cable news outlets expanded, divorces were on the rise, and the stories of children being abused, and others claiming abuse to malign a parent, exploded. As an adult, I became keenly aware of how lucky I was, never having been subjected to horrific physical or mental traumas. My eyes were opened to the fact that what I saw as a form of discipline could be interpreted by some as abuse. I was also very cognizant of the fact that had my parents delivered the punishment out of anger, they could have easily crossed that fine line.

I don’t know where discipline ends and abuse begins. I know that I was spanked as a child. I know that sometimes I learned the lesson and sometimes I didn’t. But I also know that when I was young, the thought of calling the police and reporting my parents as abusers never even entered my mind, no matter how sore my butt was.

I heard members of the media discussing this very topic. They agreed that spanking is an acceptable form of discipline, if done appropriately. They stated that if the punishment is delivered out of anger, as an outlet for frustration and rage, then it is abuse. It is only when the punishment is administered out of love, and with the intention of teaching a child what is right, that it constitutes as discipline and not abuse. But doesn’t the mother who brushes her child’s teeth with steel wool say she does it only to teach her child the importance of dental hygiene? Doesn’t the father who forces his toddler to wear a dirty diaper for two days do so only to help the child become potty-trained?

Children have been spanked for generations. And yes, they have been given alcohol, medicine, and even hot sauce. A relative of mine got hot sauce on her thumb to help her quit sucking it. She ended up crying so hard after she tasted the hot sauce that she rubbed her eyes with the same thumb. The result? Very irritated eyes. But she didn’t lose her eyesight, didn’t call the police, and didn’t suck her thumb again.

I am an extremely fortunate person. I was not abused as a child. I was punished, had pickle juice put on my thumb, was sent to bed with no supper, and was spanked. But I was never beaten. I was never psychologically tortured. I was never burned, locked in a closet, or left hungry for days. And I never, ever had any potentially harmful liquid forced down my throat or got thrown into an ice-cold shower. I could not imagine doing this to any of my children, not matter the circumstances. But mothers, fathers, stepparents, foster parents, and other so-called “guardians” do these things every day to hundreds of thousands of children. And I’d bet that if you asked any one of them why, they would all say the same thing: they did it to teach a lesson; they did it to discipline; they did it out of love.

I’m really glad my parents didn’t love me that much.