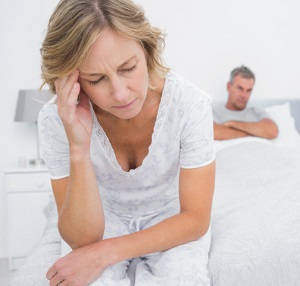 Does menopause or a hysterectomy quash or quicken your sex life? This question applies not only to those of us who might face these, but also to the romantic partners who love and live with many of us. Since our most important sexual organ is between our ears and not our legs, I believe our interest in sex (libido) is largely dependent on our beliefs about sex and what we can and should expect.

In my practice, I work with many older women who have read about increasing their estrogen levels in order to improve their sexual experiences and increase their sexual desire. Some swear by bioidentical hormones, while some declare that testosterone (T) is their favorite “hormone of desire.” (Susan Rako’s popular book bearing this title swears by T, but she backs her theory with personal anecdotes and no scientific data whatsoever.)

In 1985, researcher Barbara Sherwin wondered if lack of testosterone caused problems with libido. She discovered that administering T to women who had undergone hysterectomies enhanced the intensity of their sexual desire and increased frequency of sexual fantasies. But there was no evidence the hormone had affected their physiological response, so its effect was more motivational than physical.

There have been few well-designed studies of sexual interest in healthy people. Most studies of sexual problems have come from women who consulted their physician because of some health concern and thus had issues of some kind already. When well-known sexologist Alfred Kinsey and his colleagues spoke to women throughout their life cycles, they found that as age increased there was a distinct decline in the frequency of intercourse. But there was no decline in solitary self-pleasuring until well after age 60.

A high percentage of our feelings about sex are determined by the culture that surrounds us. I once read about a study of aging women in a small village in Thailand. Some of them experienced a decline in libido, but they celebrated this, perceiving it as a welcome release from having to worry about sex. So while uterine changes may cause some lessening of sexual desire, not everyone experiences it and not everyone who does experience it considers it a problem.

I once worked with a young, single woman who underwent surgical menopause when she was in her late twenties. (I don’t recall whether her ovaries were removed.) She initially lost interest in sex, but when she regained her libido she began to lament that men were no longer interested in dating her. She would sit in my office and weep: “I’ve lost my mojo!” I scoured professional journals and spoke to colleagues about how the surgery might have affected her level of sexual attractiveness or desirability, and finally read about a study of monkeys that showed that males were no longer attracted to females who had hysterectomies. But when vaginal secretions containing pheromones from “intact” females were rubbed on the ones who had hysterectomies, males regained interest.

Pheromone secretion aromas are sexually stimulating, and after hysterectomy they are no longer produced in females. We do, of course, need to be careful about drawing conclusions about human sexuality from animal studies such as this, since so much of our sexuality is psychological and sociological. But popular magazines have recently published findings that seem to show that men “rate” women they’re watching on video who are ovulating as “more attractive” than women of a similar age and appearance who are in other stages of their menstrual cycle.

However, it isn’t as simple as no womb, no pheromones, no sex. Many older women are seen as sexy and are enjoying as much sex as they want. I guess we’re more complicated than monkeys!