A GoodTherapy.org Review of ‘What Do Women Want?’ 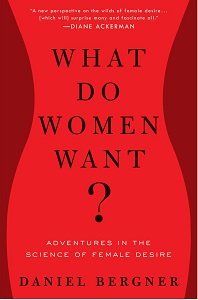 Full disclosure: I am named in the acknowledgements of the book this article focuses on. Dan Bergner and I had several conversations about sexuality when he was in the early stages of conceptualizing his book. However, the acknowledgements are at the end; I had already formed my impression of this work and had decided to write about it when I discovered this.

Dan Bergner’s new book, What Do Women Want? is sure to cause a stir among the general public, but I find myself wondering what my fellow sexologists will think. I also find myself thinking about the book from a feminist perspective, and remembering Sherfey’s hypothesis.

In 1973, psychiatrist Mary Jane Sherfey published a book called The Nature and Evolution of Female Sexuality in which she proposed that female sexuality was so inherently insatiable that it had to be systematically repressed centuries ago, once humans evolved past hunter-gatherers, in order to maintain the patriarchal order of agrarian society. Drawing on data from anthropology, primate studies, anatomy, and embryology, the Sherfey hypothesis, as it was called, maintained that women, were they unconstrained by social and religious norms instilled since birth, not to mention male power and control, would behave in ways we would call “promiscuous.” The fact women are more likely to experience multiple orgasm and do not have the refractory period that men do, for example, was proof that women had stronger and more diverse sexual requirements than men, a difference based in biology. In explaining the rigidity and severity of social sanctions against women’s sexuality, Sherfey noted that “the strength of the sex drive determines the force required to suppress it.”

Many radical second-wave feminists built on the Sherfey hypothesis and developed the theory that monogamy itself was a patriarchal invention, developed after the agricultural revolution, designed to ensure that paternity could be determined for a child. Once human social groupings gradually transformed from tribes into individual families, and once material goods could be accumulated and passed on, men were invested in passing on their wealth to offspring. To do this, men needed to ensure that their female partners were monogamous, and besides designing laws that made women chattel, they did this by evolving a belief system that glorified and rewarded female virginity and chastity, a belief system inculcated as strongly in female children as male. The combination of male power and self-enforced repression effectively eradicated strong sexual urges, or at least promiscuous sexual behavior, in all but a few women. These few who retained a vibrant sexuality were reviled and ostracized, relegated to prostitution, burned as witches, shunned as madwomen. This model neatly explains the double standard, among other things: The system of monogamy was never actually intended to apply to men. In the 1970s and ’80s some lesbian feminists believed that monogamy was a patriarchal plot and that nonmonogamy was a political as well as personal choice.

The Sherfey hypothesis and the corresponding model of the origins of monogamy always made sense to me, but I long ago stopped talking about it because it came to be seen as a bizarre theory of old school granola lesbians, right up there with the belief that cloning would someday make all males unnecessary. Now it has emerged again from an unlikely source: Bergner in his new book.

Bergner doesn’t propose that monogamy is a patriarchal plot, exactly. But the take-home message of his book is clear: Women are less suited for monogamy than men, and it may all be a colossal con job that everyone thinks the opposite. As Tracy Clark-Flory says in Salon, “There is a conspiracy theory at the heart of this book.” This conspiracy theory is not very different from the Sherfey hypothesis. Bergner, interviewing some of the leading experts in sexology and focusing on some of the most fascinating research in the field, makes the case that gender stereotypes have influenced science so much that we can’t trust most of the “data” that have formed our assumptions about female sexuality. It’s hard to read his persuasive book without concluding that women and men have been sold a bill of goods, that women would have a lot more sex with a lot more partners if they weren’t afraid to be labeled “slut,” that many women with “low desire” are really just bored, especially those in long-term relationships.

Bergner astutely recognizes that much of the (pseudo) science justifying gender stereotypes of female sexuality has come from the field of evolutionary psychology. Evolutionary psychologists excel in telling fairy tales about sex and relationships, fairy tales that retrofit sexist stereotypes to make them seem as though they are the inevitable product of Darwinian evolutionary processes. And he discusses the work of Sarah Hrdy, a primatologist who sees a positive evolutionary function to female “promiscuity.” In some ways Bergner’s book complements Sex at Dawn, the terrific book that came out a couple of years ago arguing that nonmonogamy was more in our “nature” than monogamy. Certainly, Bergner’s implications regarding monogamy and women are sure to be one of the most hotly debated issues of the book.

As a sexologist, I immediately noticed Bergner’s ability to get some prominent sex therapists/researchers to be open with their doubts and frustrations as well their accomplishments. In particular, some were refreshingly honest about their inability to help women in sexless marriages bring back their desire. Some data suggest that while men seem to be able to sustain interest in routine sex with the same partner, women need excitement and variety or that drive goes underground. Bergner’s experts pretty much admit that “hot monogamy” is largely a myth, despite the promises of myriad self-help books that are often written by sex therapists themselves.

One of the unmistakable questions raised in the book is that of the nature of female “low sexual desire.” I must admit I was secretly pleased to read Bergner politely skewering the Basson theory of female sexuality, a model that maintains that it is “normal” for women to lose lusty desire in long-term, monogamous relationships. Rosemary Basson’s model is generally accepted in the field of sexology and sex therapy, and it admittedly is a useful therapeutic device. She says that over time, in intimate relationships, women develop a different kind of sexuality. Sex early in the relationship is driven by lusty urges on the part of both partners, but women seem to lose lust more dramatically than men do in long-term, monogamous relationships. Basson reframes this as a transition from “active” sexual mode to “receptive,” which basically means the woman can get turned on if she is stimulated but doesn’t often experience an actual desire for sex. Rather than wait for a physical urge to have sex, Basson says, women must “plan” and “decide” to have sex, for reasons ranging from the desire for intimate connection to the memory that sex is pleasurable. The decision leads to foreplay and arousal, and that in turn generates sexual desire. So in this conceptualization of female desire, desire is the result of foreplay, not its precursor. In other words, you agree to have sex, “fool around” a little and your body gets aroused. It is very validating to women who have pretty much lost interest in sex after a number of years of marriage, and it helps the therapist convince a couple that they have to make dates for sex.

I have long suspected that the Basson model, even though I use it with clients, is simply a description of someone who has an inherently low sex drive which is masked in the sexual fever of infatuation. After reading Bergner’s book, I wonder if it isn’t actually a description of someone who is sexually bored. I think the model works as well for bored men as for bored women. Maybe more women complain of low desire because men aren’t as easily or as thoroughly bored by monogamy.

I loved Bergner’s account of how sex therapist Marta Meana helps encourage individuation in her couples as a way of recharging sex. She is putting into practice the central thesis of Esther Perel’s book, Mating in Captivity, and a common belief among some sexologists: that familiarity and egalitarianism may make for a happy relationship but a lousy sex life. In order to maintain heat, partners in a relationship need to maintain and cultivate some separateness, some mystery—and some sense of distance. And I love even more that Meana admits that this intervention isn’t practically suited to many couples. I wonder how sex therapists will react to the more pessimistic spin on our work—especially those making their livings off “hot monogamy” books and workshops.

And I found Bergner’s account of the attempts to develop a pill for female desire both fascinating and thought provoking, much better in context than his Sunday Times Magazine article. It reminded me that the idea of a voracious, strong, lusty female sexuality is just as frightening to Americans now as it was when Kinsey first revealed it in the 1950s.

And it made me wonder about what will happen in the long run with such a drug if it does come to pass. It will undoubtedly be, in part, a drug to cure the sexual boredom of monogamous marriage—but then again, so is Viagra at times. There are men who cannot sustain strong erections because they just aren’t aroused enough by their partners. Viagra and the other drugs of its kind have some expected but also some unexpected consequences—and ultimately, half the men who use them don’t follow through and use them again. What will be the unintended consequences of a drug for female desire?

I hope that Bergner’s book will be taken seriously by feminists. Elaine Blair’s Times review accused him of “naivety” in not recognizing the “similarities” between MRI studies of women masturbating to orgasm and past misogynistic experimentation on women. I find this bizarre. I know the people doing those MRI studies and the women who volunteer are hardly coerced, nor are the experiments harmful in any way. And they significantly contribute to our understanding of the complexities of female sexuality. I’d like to see reviews by pro-sex feminists who can forgive Bergner his gender and recognize the subversiveness of his message.

I had a few quibbles with some of Bergner’s interpretations of data, and there were some things I wish he had spent more time on, and some he omitted. But as both a sexologist and a feminist, Bergner’s book excited me, informed me, and made me think about sex and gender stereotypes, including my own. What more can you ask from a book?

I’m proud to have my name associated even peripherally with this well-written, provocative, and important book. I hope it starts some much-needed dialogue in sexology as well as influences a larger conversation about sexuality and gender.