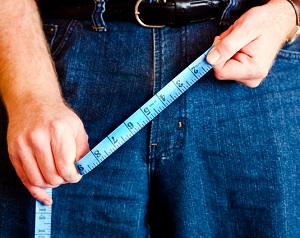 As a licensed sex therapist who is old enough to be some people’s grandma, I get to talk to a lot more men than some of my colleagues—men don’t typically sexualize me now that my hair is turning white. Years ago, when I was first licensed in 1982, guys did flirt or stare at my legs or bosom, which was distracting for everyone concerned. So, in those days, I saw 95% women in my West Hollywood office.

Today in my neck of the woods (central California coast), most licensed marriage therapists see primarily women without their partners, while I see many couples or work with them by phone if they can’t come to my office. When I counsel or coach heterosexual couples, I insist on regular individual sessions with the guys.

This puts me in a unique position to talk to men about their penises. It will not surprise readers that many men experience what my colleague Paul Joannides calls “weenie angst.” While many self-help books claim that penis size doesn’t matter, there are, in fact, two groups of folks to whom it does matter. One bunch includes most guys. The second group includes every female who derives sexual pleasure from “pivi”—penis-in-vagina intercourse.

Although it’s not politically correct for women to outwardly care about the size or shape of a man’s penis, this implies that we are not supposed to care about sexual pleasure. As Joannides once puckishly mused, “Wouldn’t you pay attention to the size and shape of something that was about to get inserted into your body?”

That said, our response to the actual dimensions varies considerably. When asked which lover’s penis is their favorite, most women usually give an immediate and direct answer such as, “It was Bruce’s,” or, “A couple stand out, but I’d have to say Mark’s takes the cake.” When I ask about the guy behind the penis, Bruce or Mark might turn out to not be people she truly cared for at all … outside the bedroom.

Plenty of females who relate sexually to men derive the majority of their pleasure from what a guy is able to do with his hands, heart, tongue, and wisdom. We might prefer one penis over another, but as one woman recently told me, “Size wasn’t a deal-breaker when I chose to marry Todd.” (She was the one who reminisced about Bruce!)

Many (most?) of us grow up believing that we are physically deficient in some way. Men worry about their size; women worry about the shape and size of their breasts, their tummy, and their bum. Advertisers exploit this and make a lot of money convincing us that our bodies and parts are wrong and need to be expanded. Particularly, of course, the penis!

In 2005, Joannides went undercover to investigate expensive surgical “penis plumping” techniques then being promoted in Beverly Hills, California. At that time, clinics were charging $7,000 for a half-hour outpatient procedure in which fat cells were harvested from the lower stomach region and injected into the penis. Yikes! Each of the three clinics he visited required that he complete multipage questionnaires designed, he says, “to make a man feel sexually insecure and blame it all on the size of his weenie.”

None of the clinics offered any long-term safety prognoses for the procedure, and, as Joannides adds, “they didn’t agree on where the fat actually went, and none was willing to say exactly how a penis feels that is encased in a layer of fat!”

Would you trust your penis to these people? I know I wouldn’t.