Self-Esteem and Being Wrong 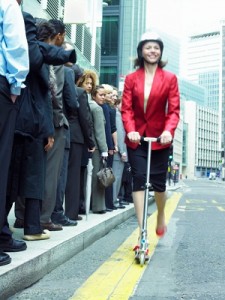 Which of the following statements are true?

People with high self-esteem:
A. Are convinced they can never be wrong
B. Don’t usually appreciate negative feedback
C. Think whatever they do is great
D. Couldn’t care less what others think of them
E. All of the above

Answer: None of these are true of people with genuine self-esteem! The truth is, the higher your self-esteem, the better you tolerate criticism and disappointment.

Let’s go over these again and get the real scoop on people with high self-esteem:

False: They’re convinced they can never be wrong
True: People with healthy self-esteem aren’t delusional; they know and accept that sometimes they mess up.

False: They think everything they do is great
True: Again, they’re not delusional. Sometimes they disappoint themselves. But unlike people with injured (i.e., low) self-esteem, these feelings are situational and temporary, rather than deep and chronic.

False: They couldn’t care less what others think of them
True: They do care, just like the rest of us. But they don’t begin with an assumption that others will find them stupid, unattractive or annoying.

We can all take a page from the high self-esteemers when it comes to being wrong. Here are a few things to remember…

But if you think about it, every single one of us on this planet – including the greatest heroes, heartthrobs and role models – is sometimes wrong. So being wrong can’t be a measure of worth as a person, because if it is, we’re all unworthy. In which case, you can relax and enjoy the good company you’re in.

Take the risk today of admitting you made a mistake. Admit it to someone with a kind heart, and pay attention to how they respond. The more you can admit that you’re wrong without experiencing rejection, the more you’ll realize that perfection isn’t required.

When you receive negative feedback:
1)    Think about who it’s coming from. Your feedback-giver is a person with his or her own motivation for saying what they said to you. Even if they say, “I only want to help you,” how much do you believe them? Depending on the person, that might be true, partially true, or completely false. Do they have a legitimate reason for wanting to help? Do you experience them as caring and helpful most of the time? In other words, be discerning when it comes to people whose feedback you take to heart.

2) Ask yourself, Is the feedback accurate? It may be 100% wrong. It may in fact be the opposite of what’s true. Or it may be right on the money. What do YOU think in your heart of hearts? If negative feedback seems accurate, it doesn’t mean you’re bad. It means you have something you can work on, if you choose to do so. Ask the feedback-giver for help. For example, if you write a story and someone doesn’t like it, ask them what they think would make it better. As long as you’ve got someone offering you feedback, you’re never alone.

3) Remember it’s about what you did, not who you are. Even if someone complains that, for example, they were hurt by something you did or said… they’re complaining about your behavior, not you. The feedback gives you information about how something you did affected someone else. And then you have many options as to how to respond.

If you receive negative feedback about something you can’t change, like your facial features or your family’s origins, you are being bullied. People who criticize things that can’t be changed are not offering constructive feedback. They are simply displaying ignorance or being cruel. Realize that you don’t deserve to be treated with cruelty, no matter how often it’s happened in the past. You can choose to seek other companions who will value those very things about you that were criticized.

People with high self-esteem are lucky enough to know that, even when their mistakes bring them criticism, they can never be wrong as people. And that’s a comforting bit of truth for all of us to remember.

© Copyright 2011 by By Tina Gilbertson, MA, LPC. All Rights Reserved. Permission to publish granted to GoodTherapy.org.