How to Reconcile Religious and Spiritual Differences With Your Partner 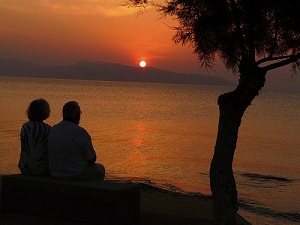 Every so often I will be treating a couple, one of whom says that the other doesn’t care about religion or spiritual matters. The complainant may cite a lack of support for his or her spiritual or religious activities. Sometimes the partner resents the time devoted to religious/spiritual pursuits.  Sometimes one or the other person feels alone when it comes to events that are more couple or family oriented (such as holiday celebrations). In my religion, the Yoruba/Lucumi faith, the activities, initiations, drumming, etc. are so labor-intensive, it is hard to imagine being with someone who isn’t in some way in the faith.

When working with these couples, I explore if there is really some other issue lurking beneath the surface of the presenting complaint. Sometimes there is something not readily apparent; for example, feelings of neglect in general, sexual problems, addictions, abuse, and so on. Ultimately, these “hidden” are the issues that must be worked on in the treatment.

However, if most of the relationship is working well and this is the real complaint, I tend to explore the feelings on both sides rather than the issue of why someone is or isn’t religious/spiritual. The feelings that typically surface are those of abandonment: sometimes there is a feeling of scorn and contempt on the part of the religious/spiritual one, loneliness on both sides, a lack of joint purpose/values/goals, or a drastically different world view and outlook on life, just to cite a few examples.

I also explore why it is so difficult for one or the other to allow the partner to be on his or her own path. Is perhaps this some form of codependence that requires homogeneity in thought and belief? Is it perhaps threatening to one or the other to be different? Are there fears that unless the two are the same, they can’t survive as a couple?

While it is important in a relationship to have shared interests and values and to some extent goals, each person in a couple does not have to be a carbon copy of the other. After all, it is different points of view that make a relationship interesting.

As long as the other person is not critical, contemptuous or belligerent as far as the other’s religious/spiritual beliefs, it is important for each person in the couple to follow his or her heart when it comes to religion and spirituality. Too many people have been pressured by parents, extended families, social groups, communities and other such entities to follow along with a certain religious/spiritual example. Ideally, this is one area where there should be freedom of choice (even though that is often not the case). So, to perpetuate that lack of choice in a relationship makes it even worse for both parties.

I do appreciate that the issue becomes more complex when it comes to raising children. If this hasn’t been discussed prior to making a commitment to the other, then it needs to be worked out with mutual respect. Often compromise is the only way to resolve something like a conflict in this area, knowing full well that the children will probably decide what they want to do in the long run anyway.

Ultimately, what couples should strive to avoid is using religion/spirituality as a tool for manipulation of one another. That goes against the very purpose of belief, and in the long run is divisive and destructive to the relationship. Respecting another’s differences is really the only choice to make.

Related Articles:
Five Domains of a Healthy Relationship
What is “This”? An Exercise in Contemplation
Appropriate Conversations about Spirituality in Counseling