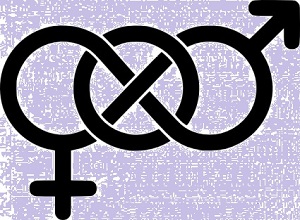 The only queer people are those who don’t love anybody. – Rita Mae Brown

Queer is a sexual identity that can be both a place of great pride and one of pain.

The term itself is a reclaimed one: Queer was once widely used—and is sometimes still used—as a slur against lesbian, gay, and bisexual people. Many people still view the term as derogatory and do not choose to use it. To many others, it is an inclusive term that grants the community power in its reclamation of the word.

Though “queer” was once intended to hurt those who now choose to use the term as an identifier, this word has become for many a word full of promise and hope. For some, it is the best way they can authentically describe their personal identity.

Queer is an umbrella term that describes sexual identity. The sexual orientation, sexual behavior, and sexual identity (OBI) model provides a way to talk about sexual identities with more accuracy (Cook & Pawlowski, 1991). In the OBI model, each of these concepts is different and separate from the others. Sexual orientation describes a person’s sexual or romantic attraction to another person. It’s not about behavior. It’s about the experience of attraction itself. Sexual behavior is used to describe the physical act of sexual activity. Sexual identity describes the way people identify themselves. Identity is personal; it’s something that each person can only decide for themselves. Gay, lesbian, bisexual, straight, and queer are all sexual identities (though there are many others).

The OBI model provides a way to look at how these three pieces of ourselves interact. Typically it’s assumed that orientation, behavior, and identity are the same. For example, there’s an assumption that a man who identifies as gay is attracted only to men and participates in sexual behavior only with men. However, real life is much more complicated, and there is no “right” way for a person’s orientation, behavior, and identity to line up. For example, a woman might be attracted to both men and women, participate in sexual behavior with only men, and identity as bisexual.

But what happens when someone who identifies as neither a man nor a woman? As both a man and a woman? As a feminine man or a masculine woman? What is the sexual orientation of someone who is attracted to people of any/all genders?

“I know I’m not a man…and I’ve come to the conclusion that I’m probably not a woman either. The trouble is, we’re living in a world that insists we be one or the other.” –Kate Bornstein

In the book Gender Outlaw: On Men, Women, and the Rest of Us, author Kate Bornstein lays out how a binary gender system, where being a man or being a woman are the only two choices, can be limiting. A person’s biological sex does not determine that person’s gender. Biological sex is the combination of hormones, chromosomes, and gonads a person is born with. Gender identity, however, describes a person’s internal sense of being a man, woman, neither, both, or other gender—it’s not based on the physical body but on how someone feels inside.

For many people, gender identity and biological sex seem interchangeable—A person’s sex as determined at birth is equivalent to their gender identity. But sex and gender are separate concepts and can line up in many different ways.

Transgender is one term that can be used to describe the experience of identifying with a gender that is different from the one that was assigned at birth. People who are transgender have discovered that their gender identity differs from their biological sex. Their true identity might be male, female, neither, or both. They might have a different gender expression entirely. Cross-cultural and historical views of gender suggest gender variance is a normal variation in human expression.

To me, being queer isn’t who you’re sleeping with; it’s just an idea that sexuality isn’t gender-based, that it’s love-based.

Queer, as a sexual identity, is notably different than gay, lesbian, bisexual, and straight because it does not depend on gender. As an identity, the term queer has the flexibility to be inclusive of all people, not just those who identify as men and women. It describes someone whose identity is not heterosexual, but who may not fit into the other available gendered sexual identity categories.

If we look back at the OBI model, queer can be used to describe the interaction between orientation, behavior, and identity for many people who find their experiences much more complex than the terms gay, lesbian, straight, or bisexual allow for. While once a term of hatred, “queer” offers a range of possibilities today.