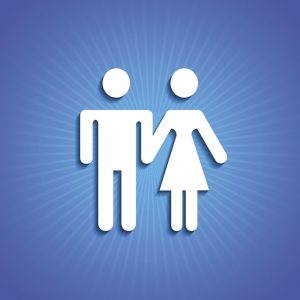 Heteronormativity, the assumption that heterosexuality is the “standard” sexual orientation and that all other orientations deviate from this norm, normalizes behaviors, values, and cultural aspects that relate to and reinforce presumed heterosexuality. In addition, heteronormativity presumes a nonexistent gender binary by recognizing only male and female genders.

The word “heteronormativity” was first used in 1991 by Michael Warner. A social critic, Warner attempted to use the concept to describe the assumptions of a heterocentric society and show the potential repercussions—social or legal—for those who somehow deviate.

A heteronormative stance places individuals who are heterosexual (straight) into a privileged group. Members of this group are male or female (according to their birth anatomy), display psychosocial traits in line with their anatomical characteristics, and perform distinct and separate gender-based functions in life. These individuals may often enjoy a higher status (heterosexual privilege) than those who are gay, bisexual, straight, have another queer identity and/or who are transgender or non-binary. This privilege may only be implicitly expressed, in many cases.

Heteronormativity serves to perpetuate an inaccurate male-female gender binary and marginalize those who exist outside the binary, those who are intersex, and those who reject traditional or patriarchal gender roles and expectations. Assuming that all people wish to someday marry and have children is a heternormative assumption, as is asking a female acquaintance if she has a boyfriend without the explicit knowledge that she is in fact romantically interested in men—or even in anyone at all.

From a heteronormative perspective, the most desirable course of life for any individual is typically one that includes finding a partner of the “opposite” gender in early adulthood, marrying, having children, and assuming traditional gender roles throughout life. This stance further assumes that all LGBTQ+ people aspire to participate in the culture and institutions of the straight population. Many LGBTQ+ individuals may wish to follow this path, but many others may not, just as heterosexual individuals may or may not desire any or all of these outcomes.

The Effects of Heteronormativity

As a consequence of heteronormativity, LGBTQ+ individuals are often marginalized and may be treated as inferior, confused, or abnormal. Heteronormativity sees heterosexuality as the standard sexual orientation and, while it may recognize other sexual orientations, categorizes them as deviations from what is considered normal, rather than recognizing and affirming all orientations as natural expressions of human sexuality. Individuals who do not adhere to heteronormative standards are also often denied many rights and benefits that those perceived as male or female, especially in the context of a heterosexual relationship, may receive as a matter of course.

When a person’s sexuality or gender does not conform to rigid and dominant societal ideals, that person may become “other,” which can make them seem different and unfamiliar and often leads to homophobia and transphobia. Individuals who do not adhere to heteronormative standards are also often denied many rights and benefits that those perceived as male or female, especially in the context of a heterosexual relationship, may receive as a matter of course.

The idea that LGBTQ+ people are somehow flawed, dangerous, different, or “less than” heterosexual individuals in any way not only leads to homophobia, transphobia, and other forms of prejudice and discrimination, it can have a direct impact on the mental and emotional well-being of those individuals. Lack of acceptance from family and friends often contributes to depression and anxiety in LGBTQ+ youth, as does bullying, which impacts up to 82% of LGBTQ+ youth, according to a 2011 study.

Heteronormativity in the Media

Historically, heteronormativity has been promoted through the exclusion of LGBTQ+ individuals in film, literature, and television. When Ellen DeGeneres came out as a lesbian on her television show, Ellen, in 1997, many Americans were shocked. Until the 2000s, it was extremely rare to see homosexuality portrayed in any type of popular media, though this is no longer the case. A number of current or recent primetime television shows and movies feature lesbian, gay, and bisexual characters in primary or supporting roles, though representation of transgender and non-binary individuals, as well as LGBTQ+ people of color, is still limited.

Heteronormativity is promoted in the media when LGBTQ+ characters are portrayed in negative or stereotypical ways. For example, while the television show Queer Eye for the Straight Guy was progressive in featuring queer characters in mainstream media, it also promoted heteronormativity by limiting its depiction of gay men as individuals with stereotypically feminine interests in style and fashion, a preference that in reality is completely separate from sexual orientation.

Some recent American television shows, such as Modern Family, The United States of Tara, and the musical series Glee, have made some progress against heteronormativity by portraying LGBTQ+ characters as complex individuals, interesting for reasons beyond their orientation and identity, who do not experience distress as a result of their orientation or because they do not conform to certain heteronormative stereotypes.

Compulsory heterosexuality, a term popularized by poet Adrienne Rich, is a cultural phenomena related to heteronormativity. It describes the domination of culture by those in heterosexual relationships and the social expectations tied to the belief that heterosexuality is the norm and all other sexual orientations are deviant.  Those whose gender identity or relationships differ from what is perceived as “normal” may be encouraged, explicity or implicity, to keep their differences “behind closed doors.”