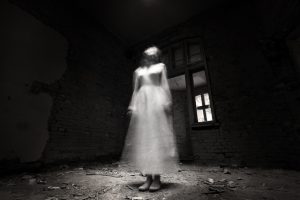 About half of all Americans believe in ghosts, with 22% reporting a personal experience with ghostly phenomena, according to a 2009 CBS News poll. Science and religion have long competed to explain seemingly paranormal experiences, such as hearing the voice of a deceased loved one or seeing ghostly figures. While no one can say with certainty that ghosts aren’t a part of our world, psychological phenomena may explain many common experiences.

People are highly social creatures, and this means they’re also highly suggestible. If you see another person behaving fearfully, for example, you’re more likely to feel fear, even if there’s no obvious threat.

Suggestibility can fuel myths about ghosts and haunted houses, particularly in an environment that seems creepy. If you stay at an ostensibly haunted house, you’re primed to see ghosts because you’ve been told you might. This means you might interpret a strange noise as a sign that a ghost is present, particularly if other people seem frightened by the noise. Old and abandoned houses and locations that have a scary story—such as a hotel where someone was killed, or a home where someone committed suicide—can further prime your mind to “see” ghosts, even when you might otherwise explain away unusual apparitions and sounds.

If you have vision or hearing problems, your odds of hallucinating are greatly increased, as degenerative conditions that affect the senses can cause you to perceive things that aren’t really there.

Perhaps one of the most frightening and common human experiences is the “phantom face.” Sleep paralysis helps to keep you safe when you’re sleeping. It prevents you from jumping out of your bed when you dream you’re jumping on a trampoline and ensures that you don’t actually hit someone when you dream you’re in a fight. Sometimes, though, sleep paralysis lasts a few moments longer than sleep itself. This can cause you to wake up unable to move, and images from your dreams can make their way into your waking life, seeming very real.

About 40% of people report seeing an image, such as a phantom face, upon waking up. This phenomenon can be terrifying, but it’s not caused by ghosts. The technical term for this type of sleep-induced hallucination is a hypnagogic hallucination.

The human mind is incredibly adept at building connections. This is the reason we’re able to master complex math, build seemingly intelligent machines, and remember vast quantities of information. But this connection-building tendency can also cause people to believe things that aren’t true. Apophenia is the tendency to see connections between unconnected events. This tendency can cause you to interpret mundane experiences as supernatural. For example, if you dream about your grandmother and then hear her favorite song on the radio, you might conclude that she’s communicating with you.

Pareidolia, a related phenomenon, occurs when people “complete” incomplete images. There are mundane examples of this in everyday life. Anyone who has noted that the front of a car looks like a face is engaging in pareidolia. Pareidolia, however, can also cause people to see ghostly images. Your mind, for example, might perceive a cloud of dust as a face. Combined with high suggestibility, apophenia and pareidolia can cause you to see things that aren’t there. And while the two behaviors can be associated with some mental health conditions, they’re normal cognitive processing mechanisms that everyone engages in from time to time.