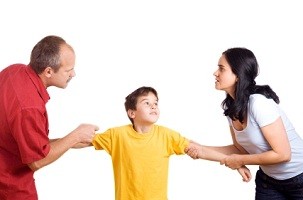 There are many ways one parent can influence how children perceive their other parent. This is often a positive experience for children, as they learn to appreciate both of their parents as individuals. Other times—especially during a divorce—this is a negative experience, making it difficult for children to manage their feelings of loyalty and have loving relationships with both parents.

It is sometimes the case that one parent is truly a danger and should not have access to the children as determined by a court of law. However, alienating behaviors often occur not because of fear of danger to children, but because of conflict between parents due to hurt feelings, imagined offenses, actual offenses, infidelities, feelings of abandonment, and more. There are various levels of alienating behaviors, all of which impact children, but some of these behaviors are more damaging than others.

Sometimes one parent might say something negative to other other parent in front of the children. Usually, they will quickly regret the statement and will try to mitigate the inappropriateness in an effort to minimize damage to the child and their relationship to the other parent. When a child already has a difficult relationship with the other parent, this effort to talk to the child about it is very important.
Behaviors can step up from there, from parents who, while they might regret their outbursts, do not believe it is their job to make sure there is a good relationship between the children and the other parent; to parents who are determined that there is no relationship possible. Parents may see this as a battle, thinking they are protecting their children, when in fact children tend to be the “casualties of war” between the warring parties.

Here are some examples of alienating behaviors, from more benign to more egregious:

This is clearly not an exhaustive list. Hopefully, you will not find yourself represented in any of them.