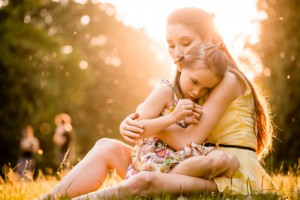 While new parents frequently seek the “right way” to parent, there is no one rule book. Rather, there are many, often contradictory, guides to parenting. The lack of certainty about how to raise and care for a child can create intense anxiety for a new parent. Some learn, soon enough, that they will figure out how to be good enough parents. Others never lose an overwhelming anxiety that each decision could have life-or-death consequences. The communication of high levels of parental anxiety frequently results in children whose anxiety controls, limits, and shapes their relationships to the world.

Anxiety is an internal state that is communicated in a variety of ways. The anxious mother holding her baby can unconsciously communicate her inner agitation through her body tension and facial expressions. The young child may sense a parent’s anxiety in the parent’s frantic behavior or speech.

Eventually the child becomes old enough to be the recipient of clear expressions of anxiety in the parent’s verbal communications. The child can experience the parent’s anxiety when told, “No, honey, you’re not old enough for play dates,” or, “I don’t care if your friends can stay out until 9. It’s not safe out there,” or in the parent’s intake of anxious breath every time the child goes down the slide or falls and bruises a knee.

Repeated exposure to parental expressions of anxiety teaches children to expect that they will be vulnerable in a risky world. These lessons are not simply intellectual. They are emotional communications which often have an unconscious component: the lesson to be learned is transmitted and received unconsciously. It is a very powerful communication.

The Inability to Self-Soothe

When parental anxiety is communicated, consciously or unconsciously, the child’s defenses are put on high alert. If parents are overwhelmed by their own anxieties and can’t soothe themselves, it can be difficult to calm and reassure their children. Without an experience of being calmed as infants, children may not develop an ability to self-soothe. They may develop anxiety, which paradoxically functions as a signal that they are in protective mode. It’s as if the anxiety is evidence of vigilance toward pending danger and thus has a calming influence.

It would be risky to let go of this essential feeling by using rational thoughts to challenge the basis of the anxiety. Instead, anxiety can be put on temporary hold with behavioral distractions that anesthetize against anxiety but don’t alleviate the feelings.

The Intergenerational Transmission of Anxiety

Kate initially came to see me two years ago because she was unhappy with her work life. She is a painter with a master’s degree in fine arts working as an administrator in an art gallery. She was doing little painting, hated her work, and felt clueless about what she wanted to do with herself professionally. She was married with a 17-year-old daughter.

Through our work, we learned about Kate’s lack of belief in her ability to be a good painter and her intense anxiety about showing her work publicly. She described a history of feeling tortured when she painted and had anxiety attacks when she had to submit work to her professors. She acknowledged that even though she won several prizes for her art and was considered very talented by the faculty, “Putting my work out there feels like I’m walking naked in the streets where everyone can see my private parts.” She never was able to initiate the showing of her work and became filled with dread the few times she was persuaded to allow her work to be seen in public.

Talking in therapy helped Kate to paint more at her small studio at home. She began to allow herself to enjoy the experience after she learned to slow down her anxious feelings and use her thoughts to calm herself. But she was clear that she thought it best to leave painting to her personal enjoyment and figure out what else she could do with her life. As we began to look further at Kate’s history, her narrative revealed her to be a person with intense anxiety about almost everything in her life:

“I’ve always had terrible separation anxiety. I went away to college, but it was less than two hours from home. I drank a lot and smoked pot from late middle school until midway through college. I over-ate, I still do. I know I’ve used these things to get rid of my feelings. I think when I started to paint and could get into a kind of Zen place and not worry about any audience, it calmed me down. That’s what probably helped with my drinking and pot smoking. But as soon as my painting was up for judgment, I would freak out. Sometimes I would skip classes or feel sick and go home for days.”

I asked how her parents dealt with her anxiety and her homecoming. Laughing ruefully, she told me, “They didn’t have a clue what to do. I made them, especially my mother, very anxious. She always seemed so agitated when I was conflicted and anxious. It was as if she didn’t want to address my issues because she didn’t know what to do, and that made her a ball of anxiety. I would feel so helpless and angry, and I think she did, too. I soon learned not to come home when I was upset. That only made things worse.”

Then Kate went silent and became tearful. I waited as she slowly began to speak. “You know, I’ve talked mostly about me and my work life in my therapy with you,” she said. “I know that my anxious mother is not news to either of us and how much that has influenced me. But I’ve been ashamed to bring up the fact I’m just like her. My daughter Erica just turned 19. She’s finishing her freshman year in college …”

Repeated exposure to parental expressions of anxiety teaches the child to expect that he or she will be vulnerable in a risky world. These lessons are not simply intellectual. They are emotional communications which often have an unconscious component: the lesson to be learned is transmitted and received unconsciously. It is a very powerful communication.

Kate paused, then started to sob and shake. “I see what’s happening,” she said. “Erica is just like me—a ball of anxiety. She calls home a lot to talk to me, not her father. I know she can feel how anxious I am about her being away at school. I don’t know if she’s calling to reassure me that she’s OK or to check in to see if I’m OK. … I’m an awful mother. I know I don’t help her and only make her more anxious. The problem is I really am scared for her. I didn’t give her the tools to take care of her feelings. Like me, she doesn’t know how to use her thoughts to find ways to counteract her anxious feelings. Worse is when she tells me her anxious feelings, I feel like the best I can do is not share my anxious feelings with her. I feel totally at a loss to offer any useful, thoughtful, soothing response.”

I was familiar with the phenomenon Kate was describing: the intergenerational transmission of anxiety. Like her mother and now her daughter, Kate’s anxiety always lurks at the edge of her emotional life. It is on call to alert her to danger and can be summoned consciously and unconsciously to send out the signal to a loved one that he or she, too, must be vigilant. What else can a good mother do? How can she not warn her child of impending danger? Kate’s mother couldn’t contain her dread and needed Kate to feel it so she could become part of the team to defend against harm. Kate needed to be sure that Erica would be able to function in the world and protect herself from all the dreadful possibilities she was at risk of encountering. While often unconscious, it is a relief for an anxious mother to know that her child is on alert and aware of the many possible threats to her well-being.

Unlike her mother, Kate had become aware of the disadvantages of being unable to manage anxiety. Her recognition that Erica’s anxiety was intensified in the presence of her own strongly contributed to her wish to disrupt this harmful intergenerational cycle. Talking with me helped her use the rational thought that “if I soothe myself and lessen my own anxiety, I will be better able to help Erica with hers.” She was determined not to perpetuate the cycle of anxiety.

Kate has begun to talk with Erica about what she has learned about the intergenerational transmission of anxiety. They have had some honest and painful discussions about the ways they each make the other anxious and have needed the other to mirror their anxiety so they could feel better. Erica has decided to begin her own therapy, and Kate continues to work with me on becoming more comfortable with all her feelings and the feelings she evokes in others. She is slowly developing a greater tolerance for her negative feelings and the negative responses she has been protecting herself from for so many years. When she experiences the anxieties of her mother and daughter, she has started to think thoughts that help her to remind herself that she is a separate person with her own feelings. She can say to herself, “I’m not the same as you. I see you are anxious and scared, but I don’t have to be. These anxieties are not rational, and I don’t have to be in that irrational-feeling space.”

This is hard work for Kate, but the strong wish for her daughter to be free from the same anxiety that has debilitated her is strong motivation for Kate to continue her struggle for change.