When Parents Struggle with Feelings about Adult Children 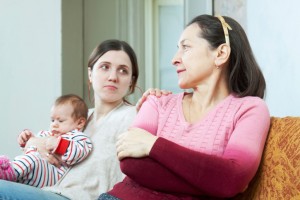 In my psychotherapy practice, I work with many young adults who come into treatment as they recognize that they haven’t developed the necessary emotional tools to succeed as an adult in the world of work and relationships. In the media and in society, I believe that the emphasis on youth frequently leads us to overlook the experience of parents who become increasingly anxious and depressed as they watch their adult children struggle to create satisfying lives.

Parents often come to see me because they are uncomfortable with their feelings about their adult children. Typically, they worry that their children will never be successful or happy, and they are confused about whether they and/or their child are responsible.

Eric was suffering when he came to see me. He felt his 27-year-old daughter, Holly, was ruining her life and it was causing him great pain. In our first session, he seemed tormented as he told me that Holly “lived in a fantasy world.”

“She’s been in one rock band or another since middle school and through college,” Eric related. “She plays guitar and she’s good. But so are a lot of kids. She majored in education, and I thought she’d be a music teacher. But since she graduated college, she hasn’t pursued teaching and says she isn’t interested. She keeps auditioning for bands and sometimes gets a gig, but nothing permanent. My wife and I think she’s depressed. We agreed she could move back home after college, but that was more than four years ago. She makes very little money and barely seems to get by on what she makes playing music. I don’t think she is ever going to grow up. She doesn’t seem very happy. My wife and I keep arguing about whether we should give her an ultimatum that she has to get a real job or we won’t keep supporting her. I don’t know … I just don’t know what to do. I think I’ve become more depressed than Holly.”

Eric’s situation was familiar to me. Many parents are caught between their desires to love, nurture, and protect their children and their fear that their children don’t have the skills, drive, or emotional strength to enter the adult world and figure out who they are and what they want for themselves. More significantly, these parents frequently find it exceptionally difficult to make demands and behave in ways that evoke their own and their children’s bad feelings. Eric was angry with himself and with Holly. His ambitions and hopes for her were mixed with his feelings about himself and the kind of parent he was and had been.

“I always supported Holly’s musical aspirations,” he said. “I took her to lessons, went to her rock performances, let her bands practice in our garage. I loved every minute of it. I suppose I thought that maybe she’d become a professional, maybe even shared her wish that she’d become a rock star. Now I wonder if I lived in a fantasy world also and didn’t give Holly enough of a taste of reality. Maybe I didn’t help her with reality in other ways. She was always so busy with her music and her friends that my wife and I didn’t ask very much of her. We pretty much said yes to almost everything: music camp, expensive instruments, drove her everywhere. She never had to pay for anything, and we’re not rolling in money. We never even gave her chores, which drove my wife crazy and we fought about that. Maybe I just let her off too easy and now I don’t think she can take care of herself. The problem is, I don’t want to take care of my grown-up daughter as if she were still a child. I feel angry at her and I hate myself for feeling this way.

“No matter how I look at it, I’m a lousy father. If I cut her off, I’m not doing what I should and that makes me bad. But I’m already a bad father because It’s my fault that she doesn’t know how to be a grown-up in the world.”

Many parents are caught between their desires to love, nurture, and protect their children and their fear that their children don’t have the skills, drive, or emotional strength to enter the adult world and figure out who they are and what they want for themselves.

After many hours of talking with Eric about his relationship to Holly, we began to understand how he and his wife, Ella, had unwittingly undermined Holly’s ability to make her way in the adult world. As I learned about Eric and the early years with his daughter, a picture of two loving parents who were smitten with their daughter emerged. Both Eric and Ella had been raised in very strict, cold families. Eric told me that he and his wife were drawn to each other when they realized that neither of them was raised with feelings of recognition or appreciation from their parents. Eric remembered talking with Ella about how they would be different and give their children extra attention and make them feel special and perfect. In talking with me about this, Eric wondered aloud.

“Maybe we went too far in the other direction,” he said. “Everything that Holly did we delighted in. We oohed and aahed over everything. The smallest thing—a smile, a scribble, a sound—was enough to get us to be gleeful toward her. We were in love. I suppose we went overboard. We married late. When we realized that we would have only one child, we got even more enthusiastic and involved with Holly. We scheduled any activity she asked for; we tried to nurture all her interests and pretty much praised everything she did and made no demands. Now I’m always so irritable with her. I feel critical, but I don’t want her to know. I don’t want to upset her. It’s awful.”

It became clear that Eric and his wife had never set limits for Holly and that they hadn’t helped her develop a sense of herself that was realistic—i.e., that had both positive and negative aspects. I suggested a hypothesis to Eric: “I think it’s likely that if Holly only received praise, she knew, if only unconsciously, that she wasn’t so completely and totally fantastic. If she couldn’t believe that she was so terrific, it would have been difficult to develop a balanced view of her strengths and weaknesses. If Holly couldn’t trust the good stuff, she probably had a great deal of uncertainty about her abilities. She even might have leaned toward thinking more negatively about herself. I think it is very likely that she is quite anxious about whether she has what it takes to make it in the adult world.”

I asked Eric what he thought of my hypothesis. After some silence, he replied: “Yes, you have put into words what I haven’t been able to put together. It hurts, but it’s a relief to feel that this all makes sense and maybe now we can figure out how to make things better for all of us.”

While my hypothesis made sense to Eric and he wanted to find more productive ways to relate to Holly, he found it very difficult to change his behavior toward her. He agreed there would have to be limit setting, but he could not get comfortable with what limits and how to implement them. For example, he thought it would be a good idea to ask Holly to start paying some rent (his wife agreed). But he obsessed about how much, when to begin, and how to bring it up. As we explored his difficulties, some of his resistances became clear.

“I know I should ask for rent, but I’m sure Holly will think I’m mean. I hate that she’ll feel like I’m not supporting her musical aspirations. I don’t want to make it more difficult for her to pursue her music career.”

Eric and I spent many sessions exploring his conflicts. He had to come to terms with his feelings of meanness and get to a place where, even if it didn’t feel good to him, he could believe that setting limits was helping his daughter by giving her the opportunity to see that she could take care of herself and succeed in the world. Some of the questions I asked Eric to consider were: What is it like for you if Holly thinks you’re mean? Do you think you’re mean? What would you have to tolerate if Holly did think you were mean? Eric also had to reconsider what actually was and wasn’t supportive of Holly’s music career. I asked: “How do you conclude that asking for rent means you’re not supporting her career? Can you consider that (even if she didn’t like it) paying rent could help Holly see herself as able to take care of herself and might give her the confidence she needs to make it in the very competitive world of music?”

Eric is wrestling with these and many other questions. He and his wife decided to give Holly three months notice to begin to pay rent. As expected, Holly was angry and hurt. She cried and accused her father of not thinking she had what it takes to be a musician. Eric stood his ground (although he reported that he felt like a bad father). He is also working on being aware of his gushing about anything his daughter tells him. He is trying to be more honest with Holly when she acts entitled or does something irritating.

Eric and I continue to work on the difficult feelings that emerge as he asks Holly to be a responsible adult. He is increasingly able to appreciate that this is having a positive effect on Holly. She is paying rent and is talking about substitute teaching. At the same time, she has formed a new band and is writing more music. Without withdrawing all of his involvement, Eric is trying to let Holly become her own cheerleader. The more he sees her taking charge of her life, the better he feels about his limit setting and the more able he is to set limits. This should lay the groundwork for Holly to become more of an adult and for Eric to feel like a “good enough” father.