When Parents Project Their Appearance Issues onto Children 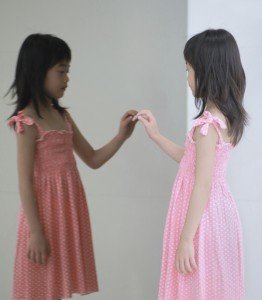 I recently overheard a young woman bemoaning that her 2-year-old was “too chubby” so she was going to put her on a diet. This started me thinking about people who are unaware of the negative consequences that result from anxieties about how their children appear to the world, especially their weight, body type, and demeanor.

“Teri” began therapy expressing anxiety and depression, mostly about her appearance: “I was an overweight kid, and everyone always made fun of me. I lost a lot of weight by high school, but it was only after I went away to college that I could reinvent myself and feel a little better about how I looked. But I kept on worrying if people liked me. Now I’m a 43-year-old woman and I’m still upset all the time about my weight and my looks. My doctor tells me that I’m not overweight, but I see all those thin, beautiful women out there, and that’s not me. I can’t lose the 15 pounds I keep trying to lose. My husband tells me that I have a great body. But how can that be when I’m not a size 2?”

Over a number of months, Teri expressed many worries—not only about her physical appearance, but about what people thought of her. Then, about eight months into therapy, Teri began to sob: “The worst thing right now, maybe worse than my gaining two pounds, is … she hates me. My daughter Marni hates me. She should. I’m a terrible mother.”

Teri hadn’t spoken much about her 15-year-old daughter. It certainly isn’t unusual for mothers and daughters to be fighting as daughters try to separate during adolescence. I wondered if this was typical mother-daughter separation dynamics, if this was more of Teri’s intense need for positive response, or if something else was going on. I asked Teri to tell me more about why she thought she was such a terrible mother.

“I can’t get it right,” Teri said. “I think Marni is depressed. She always looks unhappy. She’s alone on the computer or watching TV a lot. She goes to a great private school with really great kids from good families. But her friends are so nerdy. She doesn’t care about joining teams or clubs or about much of anything. I can’t believe my daughter doesn’t care at all about what she looks like or how other people think about her. We fight about everything: where she goes, her spending, her friends, what she eats, what she wears. She’s getting fat. I can’t stand it. I don’t like my feelings; mothers shouldn’t feel this way. But Marni isn’t the daughter I imagined I would have.”

I responded to Teri’s distress: “This sounds so painful for you. I can see how difficult it is for you that Marni isn’t interested in what is so important to you: to have a particular appearance and to be well liked by everyone. Since childhood, nothing has been more vital to you than being thin and popular. Marni is rejecting this as having value for her.”

Teri responded: “It’s true. It’s scary that she doesn’t understand the trouble she’ll have if she doesn’t make herself socially desirable. You know my family didn’t have much money. Thank goodness my husband and I do well enough. I thought that I could make my daughter happy if I bought her nice clothes, sent her to a prestigious school, and gave her advantages. But somehow it doesn’t matter. I think she’s miserable.”

It made sense to me that Marni, like her mother, hadn’t developed a positive sense of herself. I believed that she experienced Teri’s worries about her as statements about how she wasn’t measuring up to Teri’s standards. This could affect her self-esteem and self-confidence and make her anxious about asserting herself in the world. She was also probably struggling with separation and individuation, trying to be different from her socially anxious mother.

I was concerned about Marni, but I was also concerned for Teri, who loved her daughter and whose anxieties about her mothering were causing her to become more depressed. Knowing that Teri had been ridiculed and had a lot of social anxiety from elementary school on, I thought it would be helpful if she could connect her early experiences with the feelings she was having about herself and her relationship to Marni.

It certainly isn’t unusual for mothers and daughters to be fighting as daughters try to separate during adolescence. I wondered if this was typical mother-daughter separation dynamics, if this was more of Teri’s intense need for positive response, or if something else was going on.

We spent a great deal of time talking about her memories and associations to this time in her life. She spoke about how her mother was an anxious woman with no friends: “I was the center of her world. My father was away a lot, traveling for work. Mom had very little life of her own. She hardly ever left the house. She was always scared of people. I remember when I first went to school, I cried and cried. She told me I would be OK, but I have a very clear memory of her crying and looking scared.”

“Did you eventually settle in and get comfortable?” I asked.

“No,” Teri said, “I was always scared and the other kids knew it. They tortured me. They would hide my books, call me ‘fatty’ and be mean. I would tell my mother about it, but it would upset her so much, so I eventually stopped talking to her about it.”

“What would she say to you?” I wondered.

“I don’t exactly remember,” Teri said, “but I know she always told me that I had to smile, make friends, and be nice to people. She said I wasn’t fat and that I looked fine, but I knew I was fat and that I didn’t dress like the other kids.”

Teri began to cry: “You have no idea what it was like. I was always left out of things. I never had the right look, never got chosen for the team until the end. I finally just became a loner. I was pretty miserable. I guess I was depressed. Wow, I so don’t want Marni to have to go through these things. I’ve never quite put it together before. Of course, I knew I didn’t want Marni to be fat or unpopular because people make fun of you. But as I’m remembering how terribly painful it was for me, maybe I have gotten crazy about how I don’t want it to be that way for her.”

As I listened, I realized that I didn’t know what Teri actually knew about Marni’s experiences. I asked: “Do you think she has been ridiculed like you were?”

“I suppose not,” Teri said. “She has more friends and isn’t really fat like I was, just a little overweight.”

“Are there other differences that you can see between your childhood experiences?” I asked.

“You, know, I’ve never thought of this before,” Teri said, “but I complained to my mother all the time until I realized she couldn’t help me. But Marni never complains about how she is treated by her peers. Hmm … maybe she is having a very different experience than I did. She does seem more OK with her relationships at school than I was. I don’t think she gets mistreated, but I do think she’s depressed.”

“If you had to guess, what do you think she is depressed about?” I asked.

“Well, I get depressed when I feel bad about myself,” Teri replied. “I suppose she could be feeling bad about herself.”

“What do you think could be going on that she would have bad self feelings?”

“I don’t know,” Teri said. “She never puts herself out there so she can receive special good attention or notice or recognition. She does get very good grades.”

“What about negative attention?” I asked. “Does she ever feel criticized?”

Teri became silent and started to cry again: “Oh, no. It’s me. I’m her biggest critic! I’m always on her, telling her what’s wrong with her. I knew it; I have been a terrible mother.”

Teri’s sobbing increased, and then, amid sighs, she asked, “What do we do now?”

This was a turning point in Teri’s therapy experience. She was becoming emotionally related to her traumatized child self. As she became increasingly able to emotionally remember her painful experiences, she could consider that the way she related to Marni was intended to protect her daughter from having similar traumatizing experiences. This realization allowed Teri to begin to let go of her “bad mother” feelings and accept that she had tried to be a good one.

Slowly, Teri began to feel less anxious for Marni and more able to see her daughter as someone with her own ways of being in the world. The more she could distinguish her own history and anxiety from Marni’s experiences and feelings, the less anxious each felt. Teri began to see Marni’s relationship with her friends differently. She noticed that, although Marni was alone, she was often on her cell phone or computer talking and laughing with friends. Now Teri could consider that being a good mother meant being attuned to her daughter’s life from her daughter’s point of view. When Teri could distinguish her own subjectivity from Marni’s, she had fewer critical thoughts and was more open to seeing Marni’s experiences as different rather than bad. This meant Teri was projecting less of herself and was beginning to see Marni as a more separate person with her own subjectivity.

Growing up, Teri’s family had not provided her with a view of herself that gave her the internal resources to develop a positive, confident sense of self. She needed to look to externals for positive reactions in order to feel good about herself. Recognizing this, Teri could appreciate how important it is to express positive feelings to Marni about whom she was and what she did in the world.

Teri understood that she had been projecting her standards for popularity and appearance on Marni, and now she had to give Marni the emotional space to develop her own thoughts about how she looked and appeared to the world. This facilitated Marni’s separation-individuation process, as the absence of her mother’s critical projections left more room for Marni to develop her identity, self-esteem, and confidence.