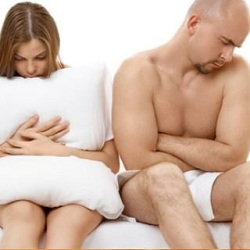 In my neck of the woods the majority of therapists see mainly women (probably about 80% of their clients). Not so for me – more than half my clients are male, and when I work with a couple it is more often the men who initiate conjoint therapy. I think this is because many guys tend to become very uptight about their penis, what Paul Joannides (author of The Guide to Getting It On) calls “deadwood – the bummer in your pants”. Many of the men I work with are concerned about their system crashing when their pants are off!

I’m not comfortable diagnosing erection problems as “erectile dysfunction.” I hate labeling, and the “dys” implies failure and the overwhelming shame that goes along with it. I never click on the links that come with the numerous ads in my spam folder offering “your instant cure for impotence” (why are they sending these to ME?). Viagra can make a huge difference but masks the issues that cause the tissues to stay soft.

It’s not just men over 50 who have erection problems. They happen to men of all ages, from teens on up. Often erectile challenges crop up quite early in a sexual relationship when folks are just beginning to find their sexual rhythms together. Many guys are nervous that their performance is not up to par – they may require a few weeks or even months to find their groove. Especially when the couple moves from dating to mating in domesticity!

So gals, remember that expecting a guy to get it up straight away could be a big mistake – especially if you truly feel that he’s the man for you.

It can make for a big opportunity to look beyond sexual performance to deep bonding with each another. The danger is not the lack of an erection, but what each of you makes of it. When a woman needs her partner’s erection to validate that she’s desirable, a short term problem can quickly become long term.

Recently a 23 year old client described a typical scenario with his fiancée, with whom he has a long distance relationship. “So it’s Friday evening and we’re coming home from a romantic dinner. She says, ‘Wanna have sex when we get home?’ and I panic! I feel like all the blood is draining from my body. It’s this deep seated fear that I won’t be able to get an erection 30 minutes from now and it becomes self-fulfilling and self-defeating. How do I get control over my own body?”

He was extremely surprised when I suggested that trying to “get control” was precisely the problem. Viagra did indeed help with his attempts to stave off what he called “hydraulic failure.” But the blue pills were only part of the picture for this couple. In this kind of situation I usually sit down with both people separately as well as seeing them together. I call this my three-legged stool approach. When you eliminate one leg the stool often topples.

His fiancée had been blaming herself, “He obviously doesn’t find me attractive any more. I’ve gained some weight…” etc. Once I helped her to realize that his erection problems had nothing to do with her, it turned out that she wasn’t nearly as attached to a hard penis as he had imagined.

Viagra produced the requisite hard-ons but was no help at all when this couple couldn’t laugh together or let go of their attachment to having things go a certain way between the sheets. They needed to learn more about intimacy. Many couples require some help deepening their intimacy, and therapy can provide the tools.