Happy in Solitude: The Joy of Being an Introvert 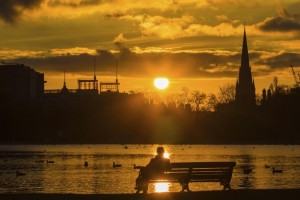 I am primarily an introvert. Growing up, I didn’t give it much thought. I just remember that I enjoyed my alone time and would get annoyed if my mother pressured me to go out and play with friends. I was having fun with my books, war toys, and train sets, and did not understand what the problem was. She seemed to think I was being antisocial, uninvolved, and perhaps depressed.

It was as if I was doing something unhealthy and it was going to be her fault if she could not find a way to change me.

The thing is, I always had a few good friends. We just got together when we felt like it. Not seeing much of each other for a week or two did not matter. We always had fun when we got together, and have remained friends across time.

There were other things we had in common:

One time, an extroverted girlfriend told me that my need for downtime was unhealthy, that I had a serious problem. This bothered me, so I decided to find out what people who are supposed to know about these things had to say about my inclination to introspection. I did not like what I found.

Among the descriptive terms for introverts in both standard dictionaries and psychological glossaries were: self-centered, primarily concerned with their own thoughts and feelings; reticent; lacking in energy and positive emotion; difficulty adjusting to social situations; excessive daydreaming and introspection; and withdrawal under stress.

A particularly annoying comment was found in the American Psychological Association’s Glossary of Psychological Terms—the message being that these behaviors and processes were matters of choice and, when not, may point to an underlying pathology such as a social phobia or avoidant personality disorder.

Talk about sandbagged! I was not choosing to enjoy solitary activities, I just enjoyed them. I was not choosing to be drained at times by ongoing interactions with others, I was just drained. Furthermore, I like people. When I choose to connect, I do so at a deep level, with genuine empathy.

However, according to some “experts” on human behavior, I run the risk of being perceived as seriously disturbed. Needless to say, I did not mention this to my girlfriend.

Years passed before I happened upon information about introversion that actually made sense. This information came from Carl Jung’s theory of psychological types and is the basis for the Myers-Briggs Type Indicator, arguably the measure of personality most widely referenced over the past 30 years.

Jung noticed that human beings have a birth nature. This nature, or psychological type, is determined by an individual’s natural and normal degree of response orientation toward one pole or the other on four behavior and/or process opposite dichotomies. Introversion-extroversion is one of these dichotomies.

As a general rule, the stronger an individual’s introverted response orientation, the greater the likelihood that the characteristics and traits above will apply.

There is a reason introverts experience a deep sense of satisfaction, even joy, in solitary pursuits, and it is not because there is something wrong with them. It is because they are, by nature, designed to generate life energy in this manner.

As with extremes in general, there is a point where one’s drive for solitude may become problematic. However, I have been working with introverted people in individual, couples, and family counseling settings for over 14 years now and, with rare exception, have found a person’s drive for solitary pursuits to be in balance with his or her degree of introverted response orientation.