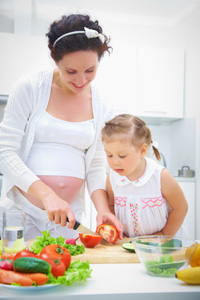 One of the most common sensory issues seems to revolve around food and eating. Specifically, many children on the autism spectrum have a particular palate that significantly limits what they will eat. This is known as food selectivity.

Food selectivity is NOT just being a picky eater. Plenty of people are picky eaters. However, when push comes to shove (or when they are hungry enough), they will eat whatever food is available. When a child is a selective eater, he or she will eat only certain foods or strictly avoid foods and will not vary his/her diet without extraordinary intervention. It can get to the point that the child makes himself/herself sick. A child may not eat unless preferred foods are available. For parents of selective eaters, this can make mealtime a stressful and challenging time.

In my 15-plus years working and living with children with autism, I have seen food selectivity in action a number of times. One time, I was consulted about a young girl whose diet consisted entirely of McDonald’s chicken nuggets and fries. That was all she would willingly eat. To keep her child fed, her mother would buy four servings of each from McDonald’s at lunch time. She would reheat one serving at dinner and pack one for school in the morning. She did this seven days a week. Any attempt to try to get her child to eat anything else resulted in severe tantrums and aggression. To put food that wasn’t chicken nuggets or fries in her mouth practically required holding the child down and force-feeding her. The team I was on helped craft a behavior support plan geared toward decreasing tantrums around mealtimes and increasing acceptance of novel foods. It took a couple of years and a lot of hard work to change her palate and get her to eat a more balanced diet.

Another child I worked with was my foster child. He came to us at 6 years of age. We were told his diet consisted of the following: round cereal, chicken nuggets, fries, and grilled cheese sandwiches (we quickly learned he didn’t like grilled cheese). I remember putting a sugar snap pea on his plate with some chicken; he started screaming and threw the plate of food across the room. Basically, if we tried to feed him anything grown from the earth that wasn’t fried first, he would reject it. His diet was high fat, high starch—what I lovingly call the autism diet. Not only was his diet restricted, he had severe gastrointestinal issues due to high levels of lead in his blood (which can lead to constipation) combined with a family history of constipation issues. For him, a balanced diet rich in high-fiber vegetables was not merely a good idea but a necessity. I crafted a behavior-shaping protocol geared toward getting him to accept new foods and we worked on it for years. It was slow and frustrating, but we made progress. He is still with us today and now eats a fairly balanced diet. He has even learned to enjoy fresh fruits such as apples and oranges.

It’s Not the Result of Lazy Parenting

Some readers may be wondering if these issues are just a result of lazy parenting. The answer is a resounding no. Think about the aforementioned examples, and imagine each meal being a literal, physical fight to get food into your child. Imagine having to spend hours to get your child to eat a meal while he or she screams and yells and hits and bites you. Imagine doing this every day, several times a day. It might be a relief to find a couple of foods your child will eat. Having a quiet meal might be an incredible gift.

I know a lot of parents of special needs kids, and very few are lazy. They are simply dealing with problems that go far beyond what many parents have to face with neurotypical children.

After my success with my son in getting him to eat better, I attended a conference about eating issues in autism. The presenter was a national expert whose practice revolved around this issue. I was pleasantly surprised to find that the methods I used with my son closely mirrored what he did. One thing he said that resonated with me was that treating eating issues was autism treatment. The act of expanding your child’s palate addresses many core autism issues such as rigidity, tolerance of change, sensory needs, and improved health and wellness.

Why They Won’t Simply Eat When They Get Hungry Enough

I can’t say why, for sure, children with autism and food selectivity don’t simply eat nonpreferred foods out of hunger. What I know from treating my son and working with many other children is that these children will make themselves ill rather than willingly eat nonpreferred foods. One child refused meals for days just because the cafeteria switched butter brands and he didn’t like the new spread. Since he primarily ate half a loaf of bread with butter as the main part of his meals, we had to get ahold of surplus packets of the old butter spread and gradually get him to adjust slowly to the new spread just to get him to eat.

My son, despite painful GI issues, would not alter his diet from foods that made him sicker. He was never able to connect his stomach pains with his diet. It took extraordinary measures (and a great deal of time) to turn things around for him. The bottom line is that while a neurotypical child will probably eat differently when there is no other choice, children on the spectrum typically will not. This leaves their parents in a quandary—do they starve and harm their child to force compliance with a healthy diet or do they simply defer to the pressures of autism and give in to their child’s desires to get him or her fed? Luckily, there is a possible solution.

One of the hallmark issues of autism is a need for structure and sameness. Children on the spectrum simply do not do well with change. By treating food selectivity and teaching a child to accept new foods, we combat this need for sameness and introduce tolerance. Learning to like new foods expands the child’s sensory world in a positive direction.

The Basic System in Five Steps

Here is the system I developed to treat my son’s food selectivity issue. I was able over the course of about a year and a half to take him from eating four foods (round cereal, red juice, chicken nuggets, and grilled cheese sandwiches) to eating a wide variety of fruits and vegetables and being willing to at least try bites of new foods. This system is based on sound principles regarding behavioral shaping.

Think about how often we eat. If every meal is a fight, imagine how draining and demoralizing that might be for a parent. By utilizing this system, meal times can become less stressful and more pleasant. The act of treating food selectivity is an important part of autism treatment. It doesn’t take any fancy therapy (although working with a skilled behavior therapist can make the process go quicker and smoother) and is well within the realm of possibility for most dedicated parents. I welcome your thoughts and experiences with food selectivity and its treatment.

Remember, parents: You’ve got this!