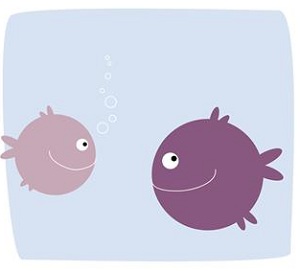 Have you seen the movie? There are a lot of parenting situations in it that we can relate to. The main one that I see is with Marlin and Nemo. Nemo has a short fin and his dad is very protective of him, which is natural. Nemo wants to show his dad what he can do in spite of his short fin, but this is a scary situation for Marlin (the dad), because he does not know how to protect Nemo.

Nemo is reacting in an age-appropriate way: He wants to show his dad what he can do; Dad won’t let him, and then Nemo does it anyway. Sound familiar? This pattern happens a lot and at different ages and stages with parents and kids. As the kids get older, we may become more comfortable with letting go, but it will still be hard.

The question is this: How do we allow our children to do more things on their own when our own fears get in the way?

At a young age, kids begin to pull away and search for independence, and as parents, we encourage that, support them, and cheer them on. When they stumble, we help pick them up and tell them to try again. When they succeed, we feel great! When they “fail,” we get discouraged and/or keep cheering them on. The latter is a healthier response: to keep cheering for and encouraging them and to allow kids to keep striving.

The challenge is when they are hurt or held back by a physical or mental challenge that as parents we want to protect them from. We may also want to protect them because of our own fears or beliefs that someone is going to hurt them even more. When a child is showing the desire to try again or to show you that he can do something, that is when it can be okay to allow it.

With Nemo, he wanted to show his father he could swim far (out to the boat) and come back. Yes, he was being oppositional and was not listening or following directions, but that is not really the point.

Marlin was afraid that Nemo would not be able to swim to the boat, and from my perspective, Marlin was afraid that he would have to go get Nemo, and Marlin was more afraid of that than anything else. So here is something to think about: we need to be aware of where our fears come from as parents. Do our fears arise from our own insecurities or doubts that we will not be able to swim to the boat? Or maybe the fear is that when our child does well, he will need us less.

Wherever Marlin’s fears were coming from, Nemo did what he believed he could do. Yes, he got caught, and his dad searched and found him; and then Nemo was able to show Dad that in spite of his short fin, he was still able to do great things. Maybe if Marlin had allowed Nemo to show him earlier, then the situation would not have had to go that far, but then the movie would not have been made.

It took Dori to point out to Marlin that maybe it was time for him to let go. Yes, they were in the whale, but Marlin got the message: Allow Nemo to show what he can do, even if Marlin has some fears.

But let’s look again at the question posed earlier: When is it okay to allow your child to have more freedom? How can parents manage their fears when a child is insisting on what he can do?

Back to Marlin and Nemo: Marlin learned that Nemo was able to do a lot of things, even with a short fin. He succeeded, and Marlin also succeeded: He learned that letting go is not only scary at times but also very rewarding. Nemo told him that he loved him and was thankful, and the letting go helped their relationship become more fun. Marlin also became better at telling jokes!

One last thought: When Marlin allowed Nemo to show what he could do, I think Marlin found his own “Nemo,” which I guess opens the door for another article on this topic: Finding “Nemo” Part II.

Related articles:
Increasing Children’s Self-Esteem
Importance of Coping Skills, Part 2: Building Resilience
When Not to Say “No” to Your Child