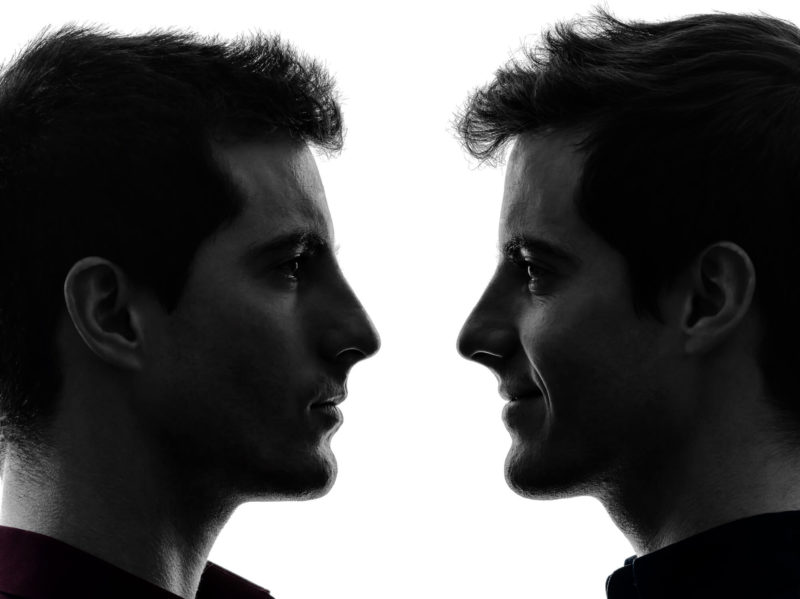 Many people use the terms “psychopath” and “sociopath” interchangeably. They are most often used about someone that is considered to be without a conscience. The societal definitions revolve around one’s approach to violence, anger, hatred, and emotionlessness. Both of these terms are bandied about on detective shows and true crime podcasts, but what do they actually mean?

The truth is, there still aren’t hard and fast definitions for either term. Indeed, they are sometimes (though decreasingly) used interchangeably. This article explores what seem to be the most common understandings of psychopathy and sociopathy within the mental health field.

First, We Must Understand Antisocial Personality

It’s important to note from the outset that both psychopathy and sociopathy are controversial ideas in the world of psychology. Neither appears in the Diagnostic and Statistical Manual of Mental Disorders V (DSM-V) as a diagnosis. However, it does mention that both “psychopath” and “sociopath” are terms used to describe people who are diagnosed with Anti-Social Personality Disorder (ASPD). Dr. Donald W. Black describes ASPD as “defined by a pattern of socially irresponsible, exploitative, and guiltless behaviour. Symptoms include failure to conform to law, failure to sustain consistent employment, manipulation of others for personal gain, deception of others, and failure to develop stable interpersonal relationships.” Many consider psychopathy and sociopathy to be two different varieties of ASPD.  Consider ASPD the “big bucket” term, like pink, and psychopathy and sociopathy as smaller buckets, like fuchsia, rose, and pastel pink.

What Is a Psychopath?

A psychopath is someone with ASPD who behaves in an amoral and antisocial way, lacks the capacity to love others or establish meaningful relationships in their personal life, demonstrates a remarkably self-centered perspective (i.e., extreme egocentrism), and doesn’t learn lessons from experience. It’s believed that psychopathy is detectable through brain scans—in fact, there is a fascinating case about a brilliant neuroscientist who discovered he had the brain of a psychopath by accident.

Characteristics of a Psychopath

What Is a Sociopath?

“Sociopath” describes someone with ASPD who has a pattern of antisocial behaviors and attitudes such as manipulation, deceit, aggression, and lack of empathy for others.

Characteristics of a Sociopath

Given that sociopathy and psychopathy are both subsets of Antisocial Personality Disorder, it’s unsurprising that there’s quite a bit of overlap between psychopaths and sociopaths. However, there are some key differences.

When most of us think about psychopaths and sociopaths, our first thought isn’t the high-powered executive or the brilliant doctor; it’s the serial killers of the world. The most common misconception about both psychopaths and sociopaths is that they are inherently violent. Many people with ASPD who might be described as psychopathic or sociopathic never harm others or act violently. Nevertheless, some of the most violent people in history did have ASPD.

Where Do Narcissists Fit in?

Narcissistic Personality Disorder (NPD) is an entirely different diagnosis that is often confused by the general public with ASPD, especially with sociopathy. According to the DSM-V, narcissists have a sense of entitlement, arrogance, and self-importance; consider themselves special; take advantage of others; need admiration; lack empathy; and are obsessed with the fantasies of boundless power. While there is some overlap between ASPD and NPD, and an individual can be diagnosed with both, there are some fundamental differences between these diagnoses.

Personality disorders are not curable. However, there is a wide variety of outcomes for people with this diagnosis. Treating ASPD is difficult but valuable. People with ASPD can tend toward illegal or risky behavior, but many don’t take this path and have very successful professional lives.

While there isn’t yet a “gold standard” treatment for those with ASPD, studies seem to indicate that psychotherapy (i.e., “talk therapy”) can yield behavioral results, particularly when it comes to criminal recidivism. Research is ongoing into the effectiveness of treating antisocial persons in a variety of ways.

When You Know Someone Who May Have ASPD

If you know someone who may have ASPD, remember that they may not be aware of it. Either way, it is important to show support if you’re part of their life.

Since people with ASPD are often prone to manipulation, it’s best for you and them if you establish boundaries in your relationship that will keep you both safe from toxicity. Remember that your character is about you—for example, if kindness is an important value to you, keep being kind, even if you can’t “be nice” all the time. Boundaries will help you be your best self in all your relationships, including (and maybe especially) this one.

Encourage Them to Seek Treatment

The most important thing a person can do to help someone with ASPD is to encourage them to seek professional help. If you or someone you know might have ASPD, rest assured that there are mental health providers who have been trained to help.

Getting an Antisocial Personality diagnosis can be scary, but you can find support and help. Generalities—including diagnoses—can be helpful, but they can also feel like life sentences. Don’t let your diagnosis define you; it’s meant to be a tool to help you and others understand the way you’re wired. While the “typical” person with ASPD probably wouldn’t reach out for help, you don’t have to fit that mold. There is always hope for growth.

Click through to find a therapist in your area who can support you or a friend through personality disorder treatment.

Wilson, H. A. (2014, March 5). Can antisocial personality disorder be treated? A meta-analysis examining the effectiveness of treatment in reducing recidivism for individuals diagnosed with ASPD. International Journal of Forensic Mental Health, 13(1), 36-46. Retrieved from https://www.tandfonline.com/doi/abs/10.1080/14999013.2014.890682?journalCode=ufmh20