Talking and Writing About Suicide: Why It Matters, What to Say 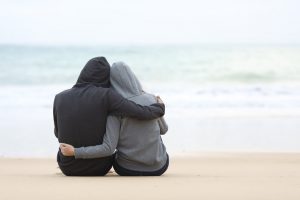 In 2017, the suicide rate reached a 33-year high. Suicide is now the second-leading cause of death among teenagers, and an American dies by suicide every 12.8 minutes.

Deaths by suicide are often surrounded by unanswered questions. Those left behind may feel a combination of grief, guilt, anger, and confusion. People experiencing suicidal thoughts often struggle to feel heard. Myths about suicide, such as the idea that talking to a suicidal person can make them more suicidal, are pervasive.

Suicide is a preventable tragedy. Knowing what to say and what to do when someone is having thoughts of suicide can save lives. The way we talk about suicide matters, and the effects of these discussions extend far beyond conversations with loved ones. Research suggests the way journalists write about suicide can increase the suicide rate. A constructive approach to reporting on and talking about suicide raises awareness and cultivates empathy without sensationalizing death.

Why We Need to Talk About Suicide

“One of the biggest misconceptions around suicide is that talking about it will cause it,” said Lisa Danylchuk, LMFT. Danylchuk is an Oakland, California, therapist who specializes in treating trauma survivors. She often works with people experiencing suicidal thoughts.

People who talk about suicide are not doing it to get attention. Bringing up suicide can be very difficult, so if someone broaches the topic of suicide, it suggests they want help. Suicide is rarely impulsive, and many people who die by suicide first discussed it with a loved one.

People concerned about a loved one’s emotions should consider broaching the topic of suicide. Initiating a discussion does not implant the idea. Instead, it can provide a safe space to talk about stigmatized feelings.

“Giving people a space to explore their feelings related to suicide often helps them process their feelings,” Danylchuk said. “It also helps those concerned to monitor the severity of suicidal ideation and reach out for the appropriate support when necessary.”

The American Foundation for Suicide Prevention (AFSP) offers a basic primer on the benefits of talking about suicide. Talk Saves Lives organizes brief presentations in communities across the nation to help people recognize the warning signs of suicide and learn how it can be prevented.

Reporting on Suicide: The Contagion Effect

Talking about suicide does not cause suicide, but reporting on it might. Articles and stories about suicide can create a contagion effect, potentially pushing people who are already at risk of suicide to more seriously consider it. Suicide prevention experts call this the Werther Effect, named for the novel The Sorrows of Young Werther by Johann Wolfgang von Goethe. After the 18th century publication of the novel, young men began imitating its protagonist. Some copied his suicide and suicide method. Some areas banned the novel in an attempt to save lives.

Researchers have observed a contagion effect associated with glamorized and heavily publicized suicide ever since.

“We have more than 100 studies from around the world now that demonstrate how media reports on suicide impact the risk of contagion,” said Daniel Reidenberg, PsyD, the executive director of Suicide Awareness Voices of Education (SAVE). “The more frequently a story is reported on, the placement of the story in a newscast or in print, the more graphic and sensational a story—all impact the audience. We know that when suicide is romanticized or glorified, that too leads to suicide contagion. When someone is memorialized in the media, some believe they too will be just like the person they are seeing in the news, and that gives them an identity or recognition that they don’t necessarily feel.”

Guidelines for Reporting on Suicide

Reidenberg says media outlets tend to rely on stereotypes and clichés when reporting on suicide, but he cautions that suicide is never because of a breakup or a bad grade in school. Multiple factors figure into the decision for someone to take their own life. Reports that gloss over this nuance make it seem like a single bad event is enough to lead to suicide.

Likewise, reports that focus only on positive characteristics of the person who died can glamorize suicide. People who feel hopeless might think they will be remembered in the same way. The same is true for reports that highlight loved ones’ reactions.

Experts make the following recommendations to journalists reporting on suicide: 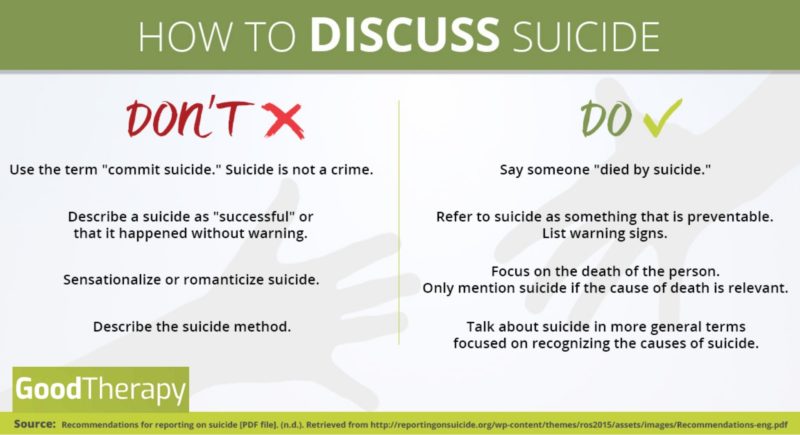 These guidelines reduce the likelihood that vulnerable people will see suicide as thrilling, glamorous, or the inevitable result of a sudden difficulty. They also help reporters avoid victim blaming and reduce stigma by treating suicide as a health concern, not a moral or criminal issue.

How to Talk to a Suicidal Person

“We know that it is okay to talk about suicide, even with someone who might be thinking about it,” Reidenberg said. “Doing so does not make them want to die more or lead them to attempt suicide. In fact, talking with someone who is thinking about this can reduce their level of anxiety, distress, and hopelessness and encourage them to seek help. Research shows that if you’re worried about someone, talk to them. It’s okay to do that.”

Danylchuk echoed these sentiments, suggesting a simple aphorism: “When in doubt, talk it out.”

Yet, talking to a suicidal person can be intimidating. Together Strong, an organization and app that helps veterans adjust to civilian life after deployment, suggests beginning the conversation directly, without judgment. Make an observation about recent behavior, or ask an open-ended question about how the person is feeling.

Don’t talk about how the person is making you feel, and don’t judge their behavior. This shuts down conversation, and can increase feelings of frustration and hopelessness. “You’re stressing me out with your negativity” is unhelpful. “I’ve noticed you seem sad lately. How are you feeling?” is more effective.

When a person shares their feelings of hopelessness or thoughts of suicide, try the following strategies:

When someone expresses suicidal thoughts or feelings, remaining engaged in a conversation is a powerful antidote. People who are able to talk have an outlet for their pain. Companionship and conversation can be temporary antidotes to thoughts of suicide.

To further reduce the risk: 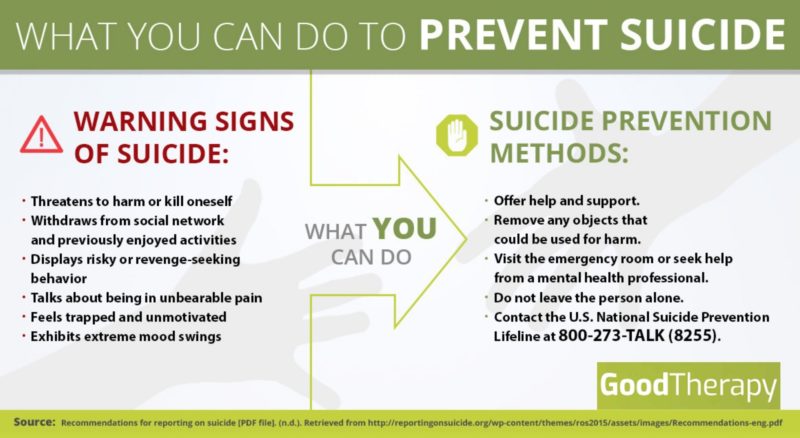 While some people experiencing suicidal thoughts may openly share these thoughts, others may suffer in silence. The AFSP highlights the following warning signs:

Suicide is preventable, and bystanders can help. If you need help for yourself or someone you love, you can call the following phone numbers for help: