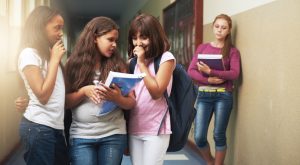 Establishing and maintaining healthy friendships is one of the most important tasks adolescents, especially girls, face in their daily lives. Many girls spend a large portion of their day either engaging with their friends or thinking about their friendships. Navigating this world can at times be likened to an elaborate game of chess, where each move is thought out and methodical, and strategies change based on the moves of others. For many girls, mood and self-esteem are inextricably linked to the outcome of these moves—the status of their friendships with others.

The social world of adolescent girls is often defined by a “survival of the fittest” mindset. In trying to survive, girls often employ strategies that can be harmful to others, even those they consider their closest friends. The use of these strategies is called relational aggression.

In order to begin to address relational aggression, one must first recognize what it looks like. This behavior (which may often be used by adolescent girls but is not necessarily specific to girls) can be defined as actions intended to cause harm to another person by damaging their relationships with others. This type of behavior is often covert, unlike outright physical aggression, and has the intent of damaging a girl’s self-esteem and social relationships. Relational aggression can be proactive—used as a means to an end—or reactive—occurring as a retaliatory response.

Examples of relational aggression include:

What Can Be Done About Relational Aggression?

Adults can be a great support for girls who are experiencing relational aggression within their friend groups. Parents and other adult role models can also help girls find more effective ways to maintain healthy relationships by:

The following skills may be helpful for girls attempting to survive the adolescent social world and thrive in environments where relational aggression flourishes.