The Psychology of Risk-Taking 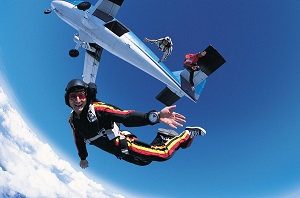 We all know an adrenaline junkie: the friend who jumps out of airplanes for fun, the sibling who spends her time traveling to war-ravaged countries, or the co-worker who spends her weekends speeding on a motorcycle. Adrenaline rushes are readily available at just about every turn. A number of factors can affect whether a person ends up a risk taker or a quiet homebody, but there’s evidence that a little risk-taking now and again is good for almost everyone.

Effects on the Brain

Risk-taking causes real changes in the brain, which might account for why risk-takers quickly seem to become adrenaline addicts. Major risks release adrenaline, which can lead to a quick rush, and dopamine, which causes intense feelings of pleasure. While these chemicals contribute to a powerful high in most people, the feelings can be especially addictive to people who are struggling with feelings of sadness or depression. Over time, risk-taking can function much like a drug. Risk-takers may need bigger risks to get the same rush, and mundane daily activities can start to seem boring and painful.

Personality plays a major role in an individual’s propensity for risk-taking behavior. While it might seem like those who worry excessively don’t make for ideal risk-takers, some studies indicate that people who score high on neuroticism – a combination of anxiety, moodiness, and worry – are more likely to become risk-takers. The data is not conclusive, though, and some studies have found that risk-takers actually score lower on measures of neuroticism than the general population.

Personality can also affect the kinds of risks a person is willing to take. The dedicated smoker might be terrified of heights, driving, or illness, without ever recognizing that smoking is a risky behavior. Some adrenaline junkies have a preferred risk-taking behavior, and this could be correlated with personality. People who love novelty, for example, might travel to dangerous locations, while people who are highly physical might get their adrenaline rush from rock climbing or mountain biking.

Cultural influences play a huge role in whether or not people are willing to take risks. As travel – particularly to remote locations – has become a part of the educational path of middle class students, more and more students are willing to travel to potentially risky locations. Peer pressure plays a huge role in risk-taking, and study after study has shown that people are more likely to take risks in a group setting.

While some risky behaviors might not be worth their potential consequences, risk-taking in small doses is almost universally beneficial for your brain and mental health. Novel experiences can help to ward off depression and reinvigorate a stale relationship. Risk-taking is often a necessary prerequisite for starting a new business or launching a new career, and the excitement associated with uncertainty can be a powerful antidote to boredom and even depression. Because dopamine produces a natural high, risk-taking behaviors can help you get a positive mood and a new perspective without the risks associated with drug use.