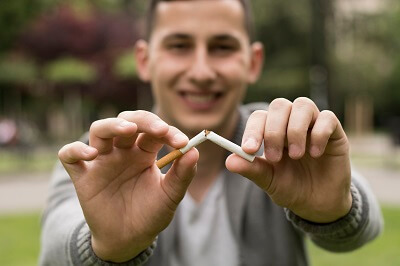 Smoking cessation is the process of quitting smoking. Because smoking causes both chemical and psychological dependence, strategies for smoking cessation typically aim to alleviate physical symptoms and develop tactics to control the desire to smoke in situations where one might typically smoke. Those who wish to quit smoking may find it helpful to speak to a therapist.

What Is Smoking Cessation?

Approximately 13.7% of adults in the United States, or 34 million adults, currently smoke cigarettes, and 16 million Americans have some type of smoking-related disease. The leading cause of preventable disease and death in the United States is smoking: Over 480,000 Americans die each year from smoking-related complications, such as heart disease and lung cancer, and over 41,000 of these deaths result from exposure to secondhand smoke.

Typically, there are a couple ways to quit smoking: by stopping altogether, known as going “cold turkey," or by gradually decreasing the number of cigarettes smoked, thus decreasing the amount of nicotine the body craves. This process can be a tedious and stressful one, and most people who smoke have to quit several times before they are successful.

There are a variety of ways to quit smoking available, many of which increase the success rate or decrease the number of attempts needed before quitting is successfully achieved. These methods include:

How Long Does It Take to Quit Smoking?

A person may make several attempts to quit before finally stopping smoking for good. Fifty-five percent of all adults who smoke attempted to quit in 2015, and 68% of adults who smoke reported that they wanted to quit. Aids such as counseling, medication, or other support are also considered to be helpful: According to research, less than 7% of people are able to quit smoking without some sort of assistance. However, studies show that 25% of those who used medication to help them quit were able to stop smoking for 6 months or more.

Developing a smoking habit often leads to a nicotine addiction. According to research, nicotine may be as addictive as heroin or cocaine. Due to this addiction, it is often very difficult to quit smoking. Those who wish to quit may attempt to quit but begin again after experiencing stress, symptoms of withdrawal, or the weight gain that can occur after quitting smoking. However, quitting is possible. In the United States, about 7 out of 10 adults who smoke wish to quit completely, and the number of people who have successfully quit smoking is greater than the number of people who currently smoke.

How to Quit Smoking with Therapy

Because it is often difficult to quit smoking, those who wish to stop, especially those who have attempted to quit in the past and experienced difficulty doing so, may find therapy can provide them with extra support. There is no one way to succeed at quitting, but studies have shown that even one meeting with a therapist or a group of people who are also attempting to quit can increase the likelihood of success. Lengthier time in treatment will generally improve the likelihood of being able to quit completely.

Therapy can be helpful at addressing and treating the causes of a smoking habit. If stress creates the urge to smoke, therapy that encourages the exploration of coping methods can reduce the desire to smoke in challenging and overwhelming situations. If smoking is a coping method to deal with the symptoms of a mental health condition such as depression or anxiety, alternative coping methods may be developed through therapy, and treatment can also focus on the underlying cause of the mental health issue. If symptoms of depression, anxiety, or another condition recede, so might the desire to smoke. An awareness of triggers for smoking can be gained in therapy and alternative behaviors can be explored, both of which may help break the habit of smoking.

Cognitive behavioral therapy (CBT) can also be helpful to smoking cessation. In CBT, methods to reframe negative or self-defeating thoughts can be explored, which may make it easier to cope with nicotine cravings and any unpleasant emotions or feelings associated with quitting, such as symptoms of withdrawal. CBT treatments may increase the likelihood that an attempt to quit is successful. Residential treatment has also demonstrated effectiveness for helping people successfully quit smoking, perhaps due in part to the fact that the treatment involves being removed from one's daily routine and stressors that might dictate a person's smoking habits.