Listen Up: Why You Don’t Feel Heard in Your Relationship 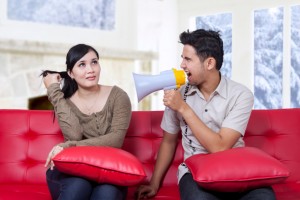 I received a call from a woman the other day in my office. She wanted to start couples therapy with her husband of 10 years. As I inquired about what was going on, I quickly learned that when the couple attempts to talk to each other, it becomes heated and they end up in a fight. She wants to come in to work on the communication skills she’s attempting to use.

I receive these kinds of calls regularly from people struggling in their marriages and relationships, and perhaps eight out of 10 couples who call me for therapy are looking for help with communication. Most self-help books and even many professionals will tell you that the key to a better relationship is good communication.

Solid, healthy communication is essential in any relationship because it’s the pathway to intimacy. When we talk and share our feelings, we feel closer to others and often get our needs met.

However, talking is only half of the equation when it comes to good communication. The other half is listening.

Without the capacity for good listening, communication becomes irrelevant.

As a human being, you have a deep desire to be heard. It started when you were a baby and needed your caregiver to hear your cries for support. The important piece of this early dynamic is not what your caregiver did or said in response to your communication, but that you were heard, period.

There’s nothing more frustrating than trying to share your thoughts or feelings with your partner only to experience deflection or defensiveness.

Being vulnerable and expressing your innermost needs and desires can be terrifying. If you’re met with resistance or feel unheard, you might experience a sense of abandonment or even shame.

Being heard conveys that your thoughts and feelings matter, and it paves the way for a deep sense of trust.

Anyone can talk. Not everyone can listen.

How do you know when you’re being heard?

When you try to communicate with your partner, check in and notice if any of the following issues arise:

The most common reason people can’t (or don’t) listen is because they shut down the capacity as a defense against experiencing discomfort. This can happen, for example, when you drive a point home beyond what is necessary, which compels your partner to shut down and stop listening even when the intention to hear you is there. You should have to communicate something only once or twice for it to be heard.

Sometimes a partner can feel overwhelmed by his or her own feelings, forcing the person to shut down or stop listening. This happens when there’s a low tolerance for emotions or if the person grew up in an environment where he or she was consistently overwhelmed by other people’s feelings.

Timing can also create a block for good listening. Trying to share what you have to say when your partner is just walking in the door after work or tending to a screaming child is unproductive for being heard.

Lastly, anxiety, stress, and even attention-deficit issues can cause a partner to struggle with listening skills.

Maintaining a sense of compassion and understanding for why your partner can’t listen to you is a first step toward improving this dynamic.

On a more practical level, Imago therapy uses a truly helpful technique with couples to improve intimacy, with the main focus on listening. It’s called “mirroring” and it requires great focus and patience.

It’s not a practice I recommend trying outside the therapy room if your conversations easily escalate. If you can remain civil, you can begin a process whereby your partner listens to you and repeats back what you have said. The goal is exact reflection (hence the name “mirroring”).

The challenge for the listening party is to resist making a point or responding defensively. The only job of the listener is to repeat what he or she heard.

Start with these steps:

If your partner becomes defensive, frustrated, or is unable to do this, abandon the idea and consider contacting a therapist.

Remember: listening is a capacity that can be diminished or strengthened depending on a person’s history or experience. While communicating effectively with your partner is an essential piece of your relationship puzzle, don’t give up without giving your communication style the benefit of professional support and guidance.