Say It or Zip It? The Perils and Profits of Truth 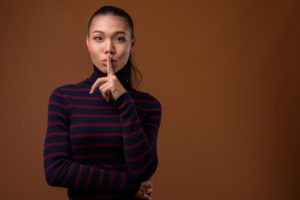 We have all experienced that uncomfortable moment when someone points out to us that something is wrong: our fly is open, we have toilet paper stuck to our shoe, or, horror of horrors, we have food stuck in our teeth. Typically we feel a surge of embarrassment and rush to fix the situation. We’re tormented by the questions, “How long has this been going on?” and, “How many people saw me?”

Hopefully the initial horror dissipates quickly, and we are grateful that someone told us about the problem so that we were able to correct it, avoiding further embarrassment.

For some people, this embarrassment can turn into shame or self-loathing, stirring feelings so painful that they may become angry at the truth-teller, preferring to remain blind to the problem and pretending it doesn’t exist … even if it means that it will continue.

Most people are aware of this discomfort and potential for conflict. If we’re the truth-teller, we may think it’s kinder to withhold the truth, protecting the person from these unpleasant feelings, staying silent to avoid conflict. However, this could mean that the problem will continue or worsen.

If we worry about telling someone about food in their teeth, imagine how challenging it is to point out a bigger issue such as a problematic personality trait or damaging behavior. For instance, how difficult would it be to tell someone that their constant complaining depresses you and makes you want to avoid spending time with them?

Even if we truly feel the need to say something, we often choose to stay silent because of the potential for a negative outcome—feeling the anguish of wanting to help someone but fearing their emotional reaction, hoping someone else will say something so we don’t have to be responsible for their feelings, or wishing they would discover the problem themselves.

Keeping the secret about how you feel can become a wedge in the relationship, impeding authentic connection and hindering the opportunity for growth and discovery.

If we can listen to the input of others without experiencing embarrassment, shame, or self-loathing, we can benefit greatly. When there isn’t a cloud of emotions getting in the way, our minds are able to discern more clearly whether input is valuable. We may find that other people can offer a valuable perspective that’s impossible for us to see from within.

For example, if you were an accountant incorrectly crunching the numbers at your firm, you would eventually be fired unless someone brought the errors to your attention and helped you to correct your mistakes. Likewise, if all of your relationships have ended because your partners felt ignored or neglected by you, you might want to heed that as important information that will aid you in achieving a life-long partnership.

So how do we learn to navigate the dangerous waters of giving and receiving input so that we can learn from others and have more honest, open relationships?

Change begins with the awareness that giving and receiving input is something that we’re going to need to get comfortable with in order to have happy relationships and be more effective in our lives. You become more comfortable with giving and receiving input after you’ve practiced it with other people and had positive experiences, unlike the negative experiences of your past.

Group therapy is an excellent environment to work on this task. Giving and receiving input is one of the main goals of most psychotherapy groups. The boundaries of the group, which discourages members from interacting outside of the group sessions, provides the safety needed for members to become more vulnerable and to try out new ways of communicating. A trained leader assists the group members in separating their thoughts from their feelings, encouraging group members to choose wisely how they would like to react to a situation instead of being led blindly by their emotions.

The combination of understanding and positive experiences can bring about important changes in your ability to navigate the perils of truth in order to reap the profits of truth.