It Feels Like Anger, but Is It Really Anxiety? 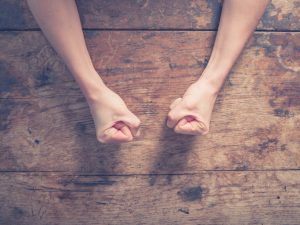 In a series of articles on GoodTherapy, I have explored the fact our anger often possesses underlying emotional triggers. My first article began the exploration by pointing out that many anger-management strategies avoid having us confront what might be lurking underneath the anger and frustration. My second article targeted unexpressed sadness as a main culprit of anger. In this article, I will focus on anxiety and how it, too, can turn into anger when left unacknowledged and unexpressed.

Anxiety must be understood as a self-created experience of fear that comes from focusing on the future. Although it can feel a bit like excitement, anxiety can feel debilitating because the focus on the feared future event seemingly paralyzes us. Anxiety takes us out of the present moment and disconnects us from the reality we’re surrounded by. Anxiety is no fun because when we believe bad things will happen, we experience bad things in the present moment. Anxiety’s connection to anger exists on the same plane as anger’s connection to all other emotions, through denial and suppression.

Since anxiety is simply another form of fear, many of us struggle with admitting that we are afraid. Like sadness and guilt, we have been preconditioned early on to deny and ignore our fear. Fear is weakness, it is said. To admit we are afraid is thus tantamount to social suicide. So instead of admitting that we feel anxious, we suppress the energy created, which in turn gets lodged in our bodies. The truth of ignoring our true emotions comes to haunt us, keeping us from living the kind of joyous, fulfilling life we’ve dreamed of.

Anxiety—ALL anxiety—starts in the mind. It begins as a small story of what we believe we lack. Confidence. Patience. Strength. Quite often, we believe we lack the very thing we think we need to be successful. Over time, the story of our perceived lack gets “proven” to us through our immobilized behavior. We stop being assertive and proactive. We stop living, and then, lo and behold, we feel weak and powerless. When not aware of these mini-horror stories and the frenetic energy they create in our bodies, we position ourselves to be overly sensitive, irritable, and angry.

The path to overcoming this anxiety issue masquerading as an “anger issue” will prove ridiculously simple. Slow down. Yup, that’s it. Although simple, I caution people in therapy that the simple process of slowing down is not so easy. The simple comes from the tiny behavioral steps you will adopt; the not-so-easy to do comes from the years of conditioning you will have to overcome.

Slowing down means realigning body with mind. More directly, it means to quiet the mind and focus on just one activity, the activity existent in the present moment. Where anxiety pulls us away from the present moment and into our minds, slowing down brings us back to the body, which always exists in the present moment. Anger that comes from unacknowledged and unexpressed anxiety often boils just beneath the surface. By “surface,” I literally mean the body. Imagine that anxiety is the fuse and some external event acts as the spark. Surrounded by potential sparks, we will explode if we do not actively defuse ourselves.

Pick something sensual to focus on right now. Pick something you can hear, see, taste, smell, or touch. Focus on the sensations that occur in your body as you drink your coffee or listen to the typing in the office. When a thought pops in, and it will, simply tell it, “Not right now, I’m slowing down.” Over time, you will get quite adept at slowing down. When slowed down, we don’t produce the anxiety that then leads to our chronic anger. Becoming masters of our own inner worlds allows us the freedom to respond to reality rather than react to it.