Is Co-Sleeping or Bed Sharing with Your Child a Good Idea? 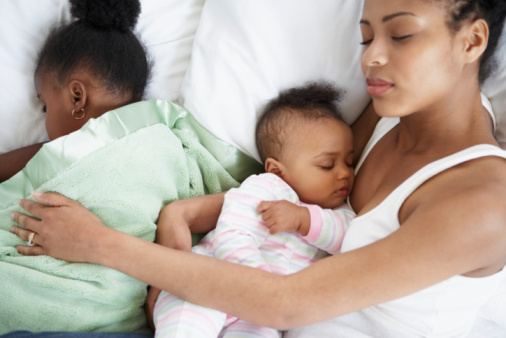 Is it OK to allow a child to sleep with his or her parents? This is a hot-button and controversial topic. Some believe there is nothing wrong with parents sharing a bed with their child as long as the parents set aside time for their own intimacy. Others believe that parents who share a bed with their child are setting themselves and the child up for future frustration and failure when it comes time to transition the child to his or her own bed. When the child knows that the parents want him or her to transition but can’t make it happen, he or she may experience guilt and believe he or she is disappointing the parents. Even parents who have difficulty transitioning a child into his or her own bed sometimes have separation issues.

Some people see the terms “co-sleeping” and “bed sharing” as synonymous. They’re not. Co-sleeping is the act of a child sleeping in the same room as the parents, perhaps in a sleeper that attaches to the bed, while bed sharing is sleeping on the same surface.

In many cultures, children have shared a bed with their parents going back centuries. However, co-sleeping and bed sharing have a negative rap in the Unites States.

As with most things, there are pros and cons. For nursing mothers, bed sharing is often easier and can be done safely. Often, though, there is concern around bed sharing with infants due to the possibility of suffocation.

Some parents struggle with the idea of having an infant sleep apart from them in a separate bed and room. Some believe bed sharing provides the best opportunity for secure attachment. Others disagree.

For parents, the decision to co-sleep or bed-share with a child is a personal one.

There is concern among some that bed sharing does not provide an opportunity for infants to learn how to self-soothe, that it encourages over-reliance on parents when the infant is upset. Another concern is that infants may not learn to fall asleep on their own.

For parents, the decision to co-sleep or bed-share with a child is a personal one. Parents must decide what works best for their family’s needs and structure. Having said that, parents should not have a child sleep with them in order to get their own emotional needs met, or as a solution to an infant’s inability to go to sleep.

Transitioning the Child to His or Her Own Bed

When parents help their child feel safe in his or her own bed, at his or her pace, while listening to any feelings expressed along the way, they will typically see the child shed any lingering concerns and successfully transition.