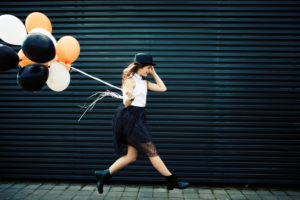 When I was 13 years old, I was a huge fan of “I Dream of Jeannie,” a show from the 1960s about a female genie who lives with her male “master” in his suburban home in the United States. Setting aside the psychoanalysis of my choice of character, when Halloween rolled around that year, I was desperate to obtain an I Dream of Jeannie Halloween costume. I remember having to convince my parents to let me buy the costume and how, due to the midriff-baring top and translucent pink pant legs, I had to compromise by wearing a nude leotard and pink tights underneath the costume in order to go trick-or-treating.

Thinking back on this encounter, I am flummoxed. Why, at 13 years old, was I already so aware of the fact that showing my belly and legs, something done every summer at the beach without restrictions or shame, was somehow different when done on October 31st?

The question of what is appropriate dress on Halloween is not a new one, especially for women and girls. The gendered marketing of costumes increasingly makes the news as consumers become more aware of the choices, or lack thereof, presented in stores. Research has shown that, out of eight archetypal categories available for costume choices, women are typically presented with only two: overtly feminine heroes and overtly infantilized, non-human characters such as animals (Sullivan, Hipple, and Hyers, 2017).

This matters in ways that go far beyond a seemingly innocuous holiday. When we sexualize a female warrior or infantilize a lion we are removing agency and power from what that character initially represents. A female warrior doesn’t exist to do battle so much as to showcase her legs; a lion isn’t here to terrorize the Serengeti but rather to passively twirl its beribboned tail at others. A modern woman who wants to dress up as Batman will, in all probability, be unable to find a simple Batman costume. Instead, options will be cute, sexy, and/or unrealistic (i.e. wearing high heels to fight crime). In other words, the original intention of Halloween—disguising oneself in ways outside the “norm”—now includes an unspoken demand for women: above all else, we must still be able to be recognized and seen as female.

Why is this? Some research has gone so far as to wonder if infantilized and/or sexualized costumes for young women are as prevalent as they are in order to reinforce underlying gender roles and myths about the lack of female competence and ability, especially considering that the uptick in availability of these types of costumes starts at an age when young women are beginning to learn about their own agency and sexuality (Sullivan, Hipple, and Hyers, 2017).

Another point to consider as we get closer to Halloween is the idea of sexual expression as a form of independence or freedom. Third-wave feminism has presented self-sexualization, even with intentions to attract the sexual gaze, as proof of female liberation and agency (Erchull & Liss, 2013). Reclaiming the female body, including how it’s dressed and for what purpose, makes the idea of dressing up as a cutesy lion or sexy warrior seem like more of an inside joke and expression of power. In other words, it can become a sort of “wink-wink” among women who know the marketers’ game and have decided to play along—but only because we feel like it.

Reclaiming the female body, including how it’s dressed and for what purpose, makes the idea of dressing up as a cutesy lion or sexy warrior seem like more of an inside joke and expression of power. In other words, it can become a sort of “wink-wink” among women who know the marketers’ game and have decided to play along—but only because we feel like it.

Celebrating our sexuality through overt dress can absolutely be a part of empowerment. However, with this empowerment comes the double-edged sword women carry of being responsible for our own safety. Research abounds regarding so-called violence prevention that rests solely on the shoulders of women, putting heightened scrutiny on our abilities to reign in our bodies and the choices we make regarding how we showcase them (Crooks, Goodall, Hughes, Jaffe, and Baker 2007). Dressing scantily on Halloween, viewed through this lens, becomes not only a rebellious act but also one that carries an undertone of risk, however unwarranted. (Unwarranted, because of course, sexual harassment, assault, or other violence is never the fault of any victim for any reason.

Can Halloween just be fun again? With a few considerations, I think so. The main takeaways here, I believe, are the importance of (1) awareness and (2) fostering a community of safety.

First, let’s separate the costume from the person. After all, the original intent of Halloween was to disguise oneself from evil spirits (Sullivan, Hipple, and Hayes, 2017). By reminding ourselves of this fact, we can allow a sexy cat costume to simply be a costume, not necessarily a reflection of, or invitation to, the person underneath. Next, it’s important for everyone to remember that no costume is ever an indication of or substitute for consent. Finally, let’s all work to continue the push for greater choice when it comes to female costumes, across all age ranges. This will allow Halloween to be a part of healthy experimentation for young folks, and perhaps more inclusive of people of all genders, rather than a siphoning point for “boys vs. girls.”

It’s also helpful to encourage ourselves and others to increase our media literacy. Our ability to decode the underlying messages presented via commercials, magazines, and yes, even Halloween costume packaging allows us to become more aware of what we are consuming and better able to make choices reflective of our actual desires.

I’ll leave you with another costume story. When I was 10, I had a burning desire to be Elvis Presley for Halloween. There were no Elvis Presley costumes to be found in the stores, so my mom set out to make me one. She helped me pin up my hair in a faux duck-tail swoop, spray-painted it black, and helped me draw on cartoonishly large eyebrows so that my oft-practiced lip snarl would have corresponding eyebrow movements. My legs were so sore that night from pulling one too many hip-swivel and finger point moves. Looking back, I’m amazed my parents felt more confident in my dressing as a male who was an actual sex symbol than my showing off my female body in a Jeannie costume.

Perhaps with more awareness, choice, and body positivity, the next generation of Jeannies and Elvis Presleys can be free to dress up without toting along all the other baggage.