Why Do Women Buy Magazines That Make Them Feel Bad? 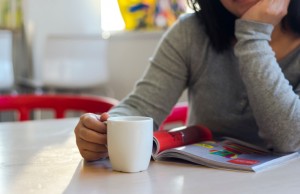 Fashion magazines may seem like little more than a diversion from the stress of everyday life, but research has repeatedly demonstrated that reading these periodicals makes women feel terrible. One study found that just three minutes spent paging through a fashion magazine left 70% of women feeling guilty, ashamed, and depressed. Another found that, regardless of the women’s size or physical appearance, women were equally negatively affected by viewing images of very thin models in fashion magazines. Yet women continue to buy millions of fashion magazines every year. A new study suggests that some women might be seeking inspiration to look like the models.

To understand why women buy magazines that harm them, researchers recruited 51 female college students to look at fashion magazines. Unlike previous studies that evaluated the effects of reviewing fashion magazines, participants in this study viewed a variety of ads and articles over the course of five days, rather than in a brief burst. Prior to the students’ participation, researchers compiled data on the young women’s magazine reading habits, their body image, body mass index, and how frequently the women compared their bodies with the bodies of others.

After the women viewed 16 pages of fashion magazines, researchers asked them a host of questions about how they felt about the magazines and their bodies. Unsurprisingly, women who compared themselves to the models felt worse about themselves, and were more likely to have dieted during the five days of the study. But some women saw the models as a source of what researchers termed “thinspiration.” They wanted to look more like the models, and viewed this as possible.

Silvia Knobloch-Westerwick, professor of communication at The Ohio State University and the study’s author, notes that previous studies have only looked at women’s reactions when the women viewed advertisements only, not text. Women may develop an affinity for models in such a context, viewing the models as relatable and a source of thinspiration. Of course, looking like a model is unrealistic for the overwhelming majority of women, and with the rampant use of photo editing tools, even the models themselves don’t always look like the finished images we see in magazines.

Knobloch-Westerwick argues that when women understand the effects fashion magazines have, rather than just seeing these periodicals as entertainment, they may be better equipped to combat the magazines’ negative effects.