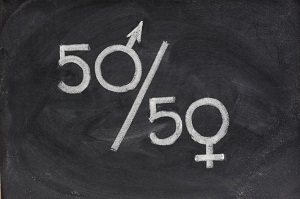 The state of Washington has been working for several years to change the language in its laws to gender-neutral terms. If legislation passes as expected, no longer will there be penmanship, freshmen, and watchmen. Instead, Washington will have handwriting, first-year students, and security guards.

The Pervasiveness of Gendered Language
Gendered language is so common that it’s difficult for some people to even notice it. From job postings to laws, words such as policeman, councilman, mankind, and fireman abound. This omnipresence of gendered language may be part of the problem. When people stop noticing gendered language, it’s easier to think of male as the default. People who do a double-take when they see words such as policewoman or police officer may be doing so because there’s an incongruence between what their expectation of a police officer is—a male—and the possibility of a woman filling the role. The more frequently gendered language occurs, the more likely it is that people develop male as the prototype for a particular role.

This can affect a wide range of behaviors and lead to subtle biases. A company that posts a job seeking an ombudsman, for example, may envision a male in the role because of the use of gendered language. This can give women a slight disadvantage when they seek out the job because women applicants don’t completely match the hiring manager’s vision for a future employee. The person in charge of hiring may never even be aware of this subtle bias, but this doesn’t mean it’s not there.

Effects on Women
From the time they’re children, women experience an onslaught of gendered language, and this can subtly alter their perceptions of themselves. Even women report that their prototype of police officers and firefighters is male, and this may be due in part to gendered language.

Gender conditioning can affect the choices men and women make, and when women grow up learning that they’re not the ideal image of a particular role, their options are limited.

Male as Default
The use of terms such as mankind is particularly problematic because it treats men as the default. When “man” is used to refer to “all of us,” women are completely excluded, even if the term is intended to be gender-neutral. Thus, men are established as the norm against which everything is judged, and women are treated as deviant from this norm.

Real-life examples of this can be found in the long-time medical practice of using only male research subjects—a practice that has changed over the past few years.