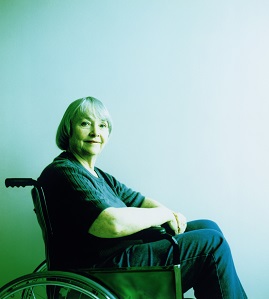 The onset of disabling illness or physical or sensory impairment is often accompanied by complicated grief processes, including depression and posttraumatic stress disorder. These grief processes are frequently developed in response to the concurrent losses people may experience when living with new abilities.

Most obviously, people who acquire a disability or disabling disease lose a part of their bodies and/or the functionality of parts of their bodies. Additionally, they may lose physical comfort, vigor, mobility, spontaneity, the ability to engage in certain activities, aspects of their previous lifestyles, privacy, a sense of dignity, a sense of control, a sense of efficacy/agency, a degree of independence, actual or perceived life roles, friends and other social supports, the ability to work, financial stability, their previous sense of identity and purpose, the ability to pursue previously established dreams, their previous body image, and, all in all, their previous sense of self as a whole. Therapists should be attuned to what a newly disabled person may have lost, or may perceive themselves to have lost, beyond the obvious loss of physical or sensory functionality.

How well people adjust to this potentially staggering array of losses is usually much more closely correlated to who they have been prior to the disability, and what social, emotional, and financial resources they have available to them, than to how “severe” the impairment itself is. The huge importance of social support after a disabling event cannot be overstated; people with new-onset disabilities may realize how lucky they are to have loving people in their lives as they have never realized it before, or they may feel almost completely socially and emotionally isolated. The most difficult disabilities to deal with in regard to social support seem to be “disenfranchised” disabilities (e.g., those resulting from Fibromyalgia/Chronic Fatigue Syndrome) in which others do not quite believe.

Non-professionals wishing to support a newly disabled person can be most helpful by being available to him or her as a friend who is willing to listen and meet him or her where he or she is emotionally. Trying artificially to cheer the person up or suggest that the person does not, or will not, have losses is not helpful. Newly disabled people will “cheer up” once they have finished grieving their losses and reorienting themselves to their new situation, often with the assistance of a counselor or therapist.

Another key to successful adaptation to a new disabling condition seems to be successful identity reconstruction, a process in which therapists can be particularly helpful. This may often entail psychological, existential, and/or spiritual shifts in perspective toward valuing innate qualities (as opposed to physical or comparative ones), authenticity, and taking life slowly and savoring it. Identity reconstruction, it should be noted, is not necessarily a finite process, as some disabling conditions are progressive and require constant readjustment.

Keep in mind that a large number of the losses with which a person with an acquired disability must learn to cope are not due to the physical impairment itself but rather to limitations imposed on the person by society. Therefore, therapists should not insist that people with disabilities “accept” their condition of disablement as theirs to adjust to, rather than, say, as an invitation to fight injustice.

Ultimately, it is much more helpful for therapists to view identity reconstruction, rather than “acceptance” of one’s disability, as the end-stage of grieving an acquired disability.