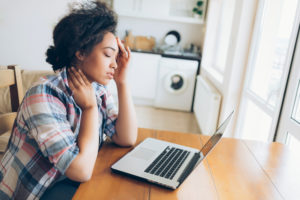 “If we could somehow end child abuse and neglect, the eight hundred pages of the Diagnostic and Statistical Manual of Mental Disorders (and the need for the easier explanations such as DSM-IV Made Easy: The Clinician’s Guide to Diagnosis) would be shrunk to a pamphlet in two generations.” —John Briere

Conversion disorder is not one of the better known mental health conditions. Google search inquiries, perhaps the most reliable way of measuring public interest in the internet age, show only a fraction of the interest generated by bipolar, OCD, or schizophrenia. The DSM-5 uses a more explanatory name: “functional neurological symptom disorder.” But this name is even less known. Ironically, conversion disorder is the modern term for one of the oldest and most famous—though now rather taboo—concepts in mental health: hysteria.

Over two thousand years ago, the cultures most interested in medical knowledge—ancient Egypt and Greece—observed that a person’s physical symptoms sometimes seemed unconnected to the usual causes. Of course, it must be said that the ancient Greek theory of illness and health, based on imbalances in the “four humors,” did not provide the most solid basis for identifying what was and wasn’t a “normal” symptom. Nevertheless, Greek scientists were correct in observing that symptoms like shortness of breath, partial paralysis, and pain were sometimes not prompted by a physical injury or illness and would recede when the patient calmed, even without medical treatment.

However, this accurate observation was taken on a walk down a blind alley—something common in the premodern age. Doctors observed that these “phantom” symptoms were far more common in women. (This has been repeatedly confirmed by modern studies.) But doctors at the time used the observation to make the factually inaccurate inference that the symptoms must be specific to women. If these mysterious symptoms were peculiar to women, the next step in the logic ran, they must be caused by something specific to women, or the womb, known in Greek as the hyster. Thus the concept of hysteria was born. In one of intellectual history’s odder chapters, bizarre theories of the wandering uterus playing havoc by pressing against internal organs were formulated and debated by some of the greatest minds of premodern medicine. Even stranger was the long-running medical debate on whether masturbation should be prescribed as a cure for hysterical symptoms or whether marriage was the proper prescription.

Fast-forward to the 19th century. The new science of psychiatry at last produced the insight that these symptoms were caused by brain disturbances, not reproductive system issues. The broad category of hysteria was divided into several more defined categories. The most extreme of these became known as hysterical neurosis, conversion type. Finally, after decades of limping along without any particular reason, “hysterical” was dropped. The diagnostic name became “conversion disorder.” The condition was characterized by the presence of neurological symptoms without an identifiable organic cause.

Whether pain originates physically (from an outside source), from a neurological dysfunction, from a mental health condition, or even from the power of suggestion or auto-suggestion, it all consists of the same thing: electrical signals in the brain.

The symptoms of conversion disorder are diverse. They include pain, paralysis, numbness, fits, and even temporary blindness. One of the most interesting features of this condition is that before diagnosis, all other possible reasons for the pain must be ruled out. Doctors must confirm that a patient is not feigning or deliberately inducing the symptoms. They must also make certain the symptoms do not stem from a neurological disease. Practically speaking, this is extremely difficult. As a result, conversion disorder is one of the hardest mental health concerns to diagnose, often leading to vigorous debate on the rate of misdiagnosis.

Conversion disorder also raises an interesting philosophical issue about the nature of pain and other unpleasant physical symptoms. We tend to distinguish between “real” and “imaginary” pain. If a rock falls on your foot and you experience a sharp pain, then that is real pain. But if you experience the same sensation in the absence of any outside stimulus, you might consider that pain imaginary.

The reality, however, is that all pain exists within the nervous system. The sensation of feeling pain, in any part of your body, is an illusion the nervous system creates to make you respond in a certain way. Whether pain originates physically (from an outside source), from a neurological dysfunction, from a mental health condition, or even from the power of suggestion or auto-suggestion, it all consists of the same thing: electrical signals in the brain.

Now, this is not to suggest that there is no point in distinguishing between different forms of pain. In fact, identifying what causes the nervous system to act in a certain way is a critically important step toward effective treatment. I do want to suggest, however, that we consider changing our attitude about what constitutes an injury.

Everyone would agree that a parent who caused their child a serious physical injury was guilty of inflicting an injury. But what about emotional wounds, such as those resulting from trauma? Children who experience abuse, frequent conflict in the home, neglect, or other trauma may experience physical symptoms that last a lifetime and are no less “real” for being indirectly caused.

If you experience symptoms that have no clear cause, I encourage you to seek support from a medical and/or mental health professional.